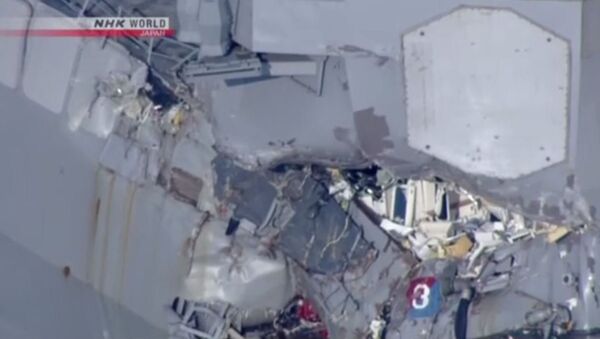 The US Navy's 7th Fleet confirmed that all seven missing sailors from the USS Fitzgerald destroyer were found dead.

Flooding in USS Fitzgerald After Collision With Philippine Vessel Stabilized
MOSCOW (Sputnik) — The US Navy's 7th Fleet confirmed in a statement on Monday that all seven missing sailors from the USS Fitzgerald destroyer were found dead, and provided their names.

The US Navy destroyer hit a Philippine merchant vessel southwest of the Japanese city of Yokosuka on Saturday. Following the collision a number of the sailors gone missing.

"The remains of seven Sailors previously reported missing were located in flooded berthing compartments, after divers gained access to the spaces, June 18, that were damaged when the Arleigh Burke-class guided-missile destroyer USS Fitzgerald (DDG 62) was involved in a collision with the Philippine-flagged merchant vessel ACX Crystal," the statement read.

"The incident is currently under investigation," the statement said.

Following the collision the US Navy's 7th Fleet said five sailors were injured and seven sailors were missing. Those injured were transferred by a helicopter to the Naval Hospital Yokosuka. On Sunday, the US Navy said a number of missing sailors were found dead in the ship's flooded compartments.