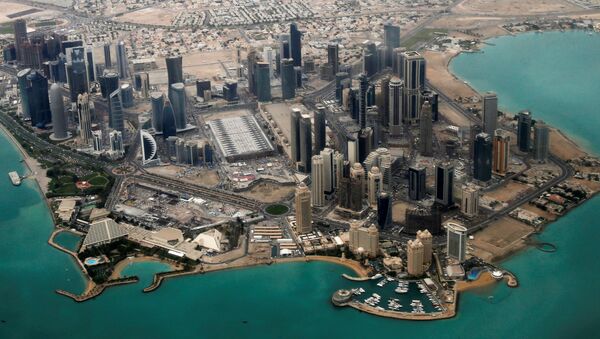 © REUTERS / Fadi Al-Assaad/File
Subscribe
International
India
Africa
The current diplomatic crisis between Qatar and other Arab states is the first actual failure of Washington’s policy in the region, according to Alexander Aksenenok, an expert at the Russian International Affairs Council think-tank.

Aksenenok pointed out that currently a "dangerous trend" is being witnessed in the Middle Eastern landscape.

"The danger of this trend is that major non-regional powers increasingly become hostages of the ambitious interests of regional players. In recent years, the role of regional powers in conflict has significantly increased," the expert said presenting his report for the Valdai Discussion Club.

'US Desire to Receive Money From Persian Gulf States' Behind Qatar Crisis
According to him, the Qatar crisis is the "first real failure" of Washington’s policy in the Middle East and the Gulf region.

"This was a result of the fact that United States’ allies and partners in the region managed to take advantage of the situation created by [US President Donald] Trump with his anti-Iranian statements in Riyadh," Aksenenok said.

The expert noted that in this situation Washington’s allies used American diplomacy for their own interests.

"This crisis doesn’t serve the interests of the US. It is a result of the fact that the US presidential administration is still undecided on what it policy in the Middle East should be. Currently, they’re learning by trial and error," Aksenenok said.

However, the expert drew attention to the possible negative consequences of Trump’s anti-Iranian stance.

"There is a danger. If Trump continues his anti-Iranian policy this may have very dangerous consequences and have a negative effect on the Syrian settlement, including the efforts by Russia, Turkey and Iran on military de-escalation," he pointed out.

Tillerson Cancels Mexico Trip to Continue Bid to De-Escalate Qatar Crisis
Aksenenok added: "It is very important to engage the US and Saudi Arabia to those efforts, because the current guarantors of the Syrian settlement [Russia, Iran and Turkey] may need help in the long-term."

On June 5, a number of countries, including Saudi Arabia, the United Arab Emirates, Bahrain and Egypt, cut diplomatic ties with Qatar and embargoed all sea, air and land traffic to the country, accusing Doha of supporting terrorist groups, particularly the Muslim Brotherhood terrorist movement, as well as of interfering in other countries' domestic affairs. Several other states in the region reduced diplomatic relations with the country.

Qatar Must Stop Using Al Jazeera for Aggression Toward Bahrain - Ambassador
Formally, the crisis was triggered after a Qatari news agency published a statement of Qatari Emir Sheikh Tamim bin Hamad Al Thani calling for the establishment of relations with Iran and expressing support for the Muslim Brotherhood (a terrorist organization banned in Russia).

Doha later said that the agency's website was hacked and there was no such statement from the Qatari leader. Nevertheless, Saudi Arabia, the UAE and Bahrain viewed the explanation as unconvincing. A number of other states, including Turkey and Kuwait, have been attempting to mediate the crisis.