How Reported Death of al-Baghdadi Could Affect Daesh 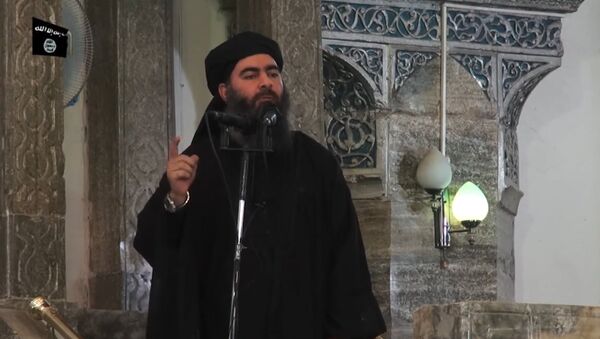 © AFP 2021
Subscribe
On Friday, the Russian Defense Ministry reported that Daesh leader Abu Bakr al-Baghdadi may have been killed as a result of a Russian airstrike south of Raqqa in late May.

The Daesh leader may have been alongside other leaders of the extremist group and 330 terrorists killed in the airstrike.

"As a result of the Su-35 and Su-34 airstrikes, high-ranking commanders of the terrorist groups who were part of the so-called IS [Daesh] military council, as well as about 30 mid-level field commanders and up to 300 militants of their personal security, have been killed," the ministry said in a statement.

Putin Briefed on Russian MoD's Report on Possible Baghdadi Elimination
The death of al-Baghdadi has not yet been confirmed though.

On Friday, Russian Foreign Minister Sergei Lavrov underscored that the Russian military did not have 100 percent proof of the Daesh leader’s elimination.

"All examples of such actions on the destruction, 'beheading' of terrorist groups have always been presented with great enthusiasm, however, history shows that the fighting capacity of these structures [terror groups] were then restored," Lavrov told a news conference.

Does Daesh Have a Leader?

Why Defeat of Daesh ‘May Not be the End of the Terror Organization’
According to Russian senator Alexei Pushkov, the death of the Daesh leader would speed up the defeat of the terrorists.

"The death of al-Baghdadi will be a severe blow to IS [Daesh], if confirmed. The group is in full retreat. The death of its leader will prompt a military defeat," Pushkov wrote on Twitter.

In an interview with Sputnik, Deputy Chairman of Russia's Federation Council Committee on International Affairs Andrei Klimov underscored that the death of the leader will weaken Daesh but it will not decide the fight against terrorism.

"The reported death of Al-Baghdadi does not mean that it is time to stop combat actions [against terrorists]," Klimov said.

The alleged death of al-Baghdadi could help facilitate the liberation of Raqqa, the de facto capital of Daesh, according to Russian Senator Viktor Ozerov, chairman of the Council of the Federation Committee on Defense and Security.

"Ultimately, this will help solve the task of freeing Raqqa," Ozerov told Sputnik.

Senior Daesh Media Producer Killed in US Airstrike in Afghanistan
According to the lawmaker, the death of the leader usually breaks the commanding structure of a group, and this will happen to Daesh if al-Baghdadi’s death is confirmed.

At the same time, Russian military expert Viktor Murakhovsky questioned the fact that al-Baghdadi is the real leader of Daesh.

"He may have been there at the moment of the Russian airstrike and he may have been killed. But this would not have any serious impact on the course of the conflict in Syria," Murakhovsky told Sputnik.

According to the expert, as a militant organization Daesh operates rather as a net-centric structure.

The reported death of al-Baghdadi will not disorganize the Daesh ranks, according to Egyptian military expert Gen. Nabil Fuad.

"This will not lead to a strategic breakthrough. Such organizations are based on the principle of rotating leadership in the event of the death of their leader. Possibly, the reported death of al-Baghdadi will be negative for terrorists’ morale," Fuad told Sputnik.

He noted that there have been several reports of al-Baghdadi’s death, none of which was confirmed.

Later on Friday, the Russian military released a photo demonstrating the results of the airstrike conducted on May 28 against the Daesh headquarters in Raqqa. 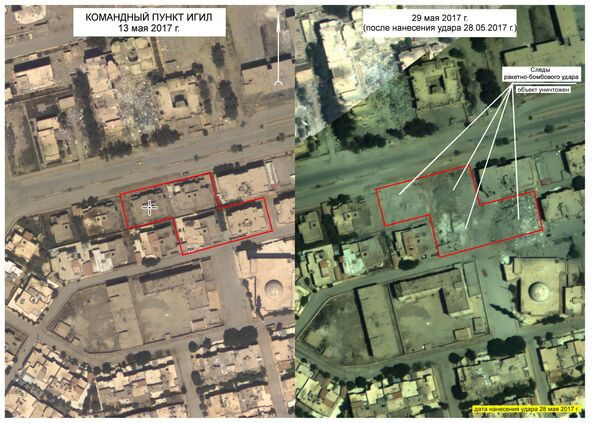 In military terms, the airstrike was very well planned and carried out, according to Russian military expert and journalist Igor Korotchenko.

"The released pictures prove that the target was complex, comprising of several buildings. All of them were destroyed in the airstrike. All of the terrorists inside must have been killed there. There can be no survivors after such an airstrike," Korotchenko told Sputnik.

He also noted that intelligence did very well, including revealing the plan of a "military council" and providing all necessary information for a "sudden pinpoint strike."

According to Korotchenko, the operation was planned with the use of satellite images, data from radio-radar intelligence and information from drones.

000000
Popular comments
Well , SPUTNIK is becoming an ANALYTICAL TOOL, rather than a NEWS SOURCE. Sorry, but lately, new are not found here. And I hear many complaining. Even IRAN news outlet, get new news every 30 min they claim. And are struggling to become the FIRST source of global news!! SPUTNIK must NOT let west meddle and pay off all, and/or PLANT operatives in.
cast235
17 June 2017, 13:48 GMT
000000
If it's true that al-Baghdadi has finally been killed in a Russian airstrike, should Russia apologize to CIA for destroying one of its most valuable assets in the region?
Zoro
17 June 2017, 17:39 GMT
000000
Newsfeed
0
New firstOld first
loader
LIVE
Заголовок открываемого материала
Access to the chat has been blocked for violating the rules . You will be able to participate again through:∞. If you do not agree with the blocking, please use the feedback form
The discussion is closed. You can participate in the discussion within 24 hours after the publication of the article.
To participate in the discussion
log in or register
loader
Chats
Заголовок открываемого материала
Worldwide
InternationalEnglishEnglishMundoEspañolSpanish
Europe
DeutschlandDeutschGermanFranceFrançaisFrenchΕλλάδαΕλληνικάGreekItaliaItalianoItalianČeská republikaČeštinaCzechPolskaPolskiPolishСрбиjаСрпскиSerbianLatvijaLatviešuLatvianLietuvaLietuviųLithuanianMoldovaMoldoveneascăMoldavianБеларусьБеларускiBelarusian
Transcaucasia
ԱրմենիաՀայերենArmenianАҧсныАҧсышәалаAbkhazХуссар ИрыстонИронауОssetianსაქართველოქართულიGeorgianAzərbaycanАzərbaycancaAzerbaijani
Middle East
Sputnik عربيArabicArabicTürkiyeTürkçeTurkishSputnik ایرانPersianPersianSputnik افغانستانDariDari
Central Asia
ҚазақстанҚазақ тіліKazakhКыргызстанКыргызчаKyrgyzOʻzbekistonЎзбекчаUzbekТоҷикистонТоҷикӣTajik
East & Southeast Asia
Việt NamTiếng ViệtVietnamese日本日本語Japanese中国中文Chinese
South America
BrasilPortuguêsPortuguese
NewsfeedBreaking
12:01 GMTMachete-Wielding Man Injures Four People in Canada's Calgary
11:38 GMTRussian Deputy Prime Minister Not Ruling Out Repetition of Energy Crisis in Europe
11:24 GMTNorth Korean Website Slams 'Squid Game' as Showing 'Hell-Like Horror Where Only Money Matters'
11:07 GMTDeath Toll From Kandahar Mosque Bombing Rises to 63
11:02 GMTFrench Politician: US Has Moral and Legal Obligation to Unblock Afghan Assets & Let the Nation Be
10:59 GMT‘Killed Serving the People’: UK Media Shows Rare Display of Cross-Party Unity in Tribute to Dead MP
10:50 GMTIs Russia in Danger of Running Out of Gold Deposits?
09:08 GMTUS-Greek Bases Pact Signals Bid to Pressure Turkey, Dominate East Mediterranean
09:02 GMTAustrians Invited to Presidential Palace for COVID-19 Shots
09:00 GMTNASA's Lucy Mission Blasts Off to Examine Trojan Asteroids
09:00 GMTPremier League: Five Biggest Games of Matchweek Eight
08:55 GMTUK Police Ordered to Immediately Review MPs' Security Arrangements After Fatal David Amess Stabbing
08:30 GMTSeveral Dead and Dozens Injured: What Was Behind Thursday's Bloody Events in Lebanon?
07:33 GMTISS Crew Was Woken Up by Siren at Night
07:16 GMTAnother Day, Another Blunder: Psaki to ‘Choose Words More Carefully’ After Ethics Watchdog Complaint
07:12 GMTNetflix Fires Organiser of Trans Employee Walkout for Leaking Internal Documents, Reports Say
06:08 GMTFour Indian Paramilitary Personnel Injured in Blast at Raipur Railway Station
05:59 GMTBiden Admits He Will Have to 'Build Back Better' With Less, Is ‘Not Going to Get $3.5 Trillion’
05:45 GMT‘Sensational’ Remains Buried by Ancient Vesuvius Eruption Discovered at Herculaneum
04:34 GMTJapan Prime Minister Wants to Include Possible Attack on Enemy Bases in Security Strategy