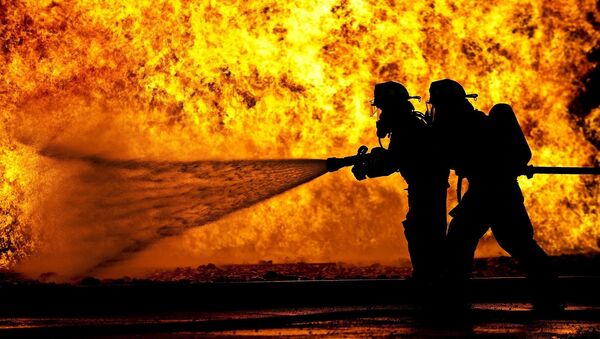 CC0 / Pixabay /
Subscribe
Officials say the Grenfell Tower death toll will rise considerably and many of the victims may never be formally identified. But as anger grows, it appears the fire will join a long list of blazes which eventually changed the world.

The Prime Minister, Theresa May, has already announced a public inquiry into the disaster on Wednesday (June 14) in North Kensington and there have been calls for far-reaching changes to safety standards in tower blocks in Britain.

A drone courtesy of @kentfirerescue & specialist search dogs are all part of our operations with @metpoliceuk at #GrenfellTower #999Family pic.twitter.com/3bCWXYmWvC

Tragically it often takes a horrific fire and scores of deaths to highlight a weakness in design or legislation.

In the early part of the 19th century the theater industry was booming in the United States with millions of Americans flocking to see shows not just on Broadway but in all the major cities.

But it took a horrific fire at the Iroquois Theater in Chicago, which killed 602 people, before politicians realized that many of these auditoriums were death traps.

The death alley in Chicago 2016. Hundreds of bodies laid in this alley after a massive fire to the Iroquois theater in 1903. #chicago pic.twitter.com/ZJrGd1TLnV

The fire on December 30, 1903 began when the stage curtain caught fire and it spread rapidly. Many in the audience died in their seats, asphyxiated by the acrid smoke. The theater had 30 exits but 27 of them were blocked or opened out into mid-air. Many victims died after trying to jump to safety.

State and federal legislation was introduced in the wake of the blaze which introduced maximum seating capacities, ventilation and fire exit improvements, regular inspections and tougher penalties for flouting the law. These were copied by many European countries.

Nowadays New York’s main industry is the financial sector but before the First World War it was a thriving manufacturing center.

Downtown Manhattan was full of factories producing everything from clothes to furniture.

But many of these places were little more than "sweatshops" and they used buildings which had not been designed as factories and had numerous safety flaws.

The Triangle Shirtwaist Company occupied three floors of a 10-story building and when a fire broke out there one day in March 1911 it led to the deaths of 146 workers, mainly women who had received immigrated to the US.

The factory’s owners had locked most of the exit doors to prevent workers pilfering material and an inspector’s recommendation of regular fire drills had been ignored.

After the fire a commission was set up to introduce factory working conditions and the city also set up the first fire prevention bureau.

Between the war giant airships were touted as the answer to transatlantic travel but a huge disaster in May 1937 put the nail in the industry’s coffin almost overnight.

It was also a massive public relations disaster for Hitler’s Germany.

The Hindenburg, which had been symbolically named by the Nazi regime to honor First World War general, Paul von Hindenburg, who had died three years earlier. It was on its 63rd flight, from Frankfurt to New York, when disaster struck.

The airship, carrying 36 paying passengers and a crew of 61, was just docking in Lakehurst, New Jersey, when a spark triggered a huge explosion in the hydrogen which fueled it.

It crashed to the ground in flames and radio commentator Herb Morrison broke down live on air as he described it:

"It's smoke, and it's in flames now; and the frame is crashing to the ground, not quite to the mooring mast. Oh, the humanity!"

Airships quickly went out of fashion, despite the realization that the problem with the Hindenburg was the use of hydrogen instead of helium as fuel.

Nightclubs have sadly seen many disasters over the years but the worst of them all was the blaze at the Cocoanut Grove in Boston in 1942.

The owners, in their greedy search for maximum profits, had scrimped on safe exits and used highly flammable materials in the basement bar, which was where the blaze started.

They also ignored the safety capacity of 600 and on the night of the fire an estimated 1,000 people were inside. The fire tore through the club in less than 12 minutes, killing 492 people.

One of the major lessons learnt from the fire was the lethal flaw in having revolving doors at the exit.

Almost half of the deaths resulted from people being unable to operate the revolving doors at the main entrance because of the panic and the crushing.

The fire led to major changes in fire safety legislation and building codes.

The Grenfell Tower is the worst tower block fire of the 21st century. But in February 1974 a fire at the Joelma Building in Sao Paulo claimed 179 lives.

The full horror of the fire, which was triggered by a spark from a malfunctioning air conditioner, was brought home by television cameras which showed residents on the upper floors of the 25-story building climbing onto their balconies as they tried to escape the flames.

The majority of the 756 people in the building escaped but it was the worst tower block fire of the 20th century and happened only weeks before the Hollywood film The Towering Inferno, starring Steve McQueen, came out.

The fire helped to erode confidence in Brazil’s military government, which would finally restore democracy in 1979.

Smoking had been allowed on the London Underground ever since it was first built in the 19th century.

Smoking on the trains themselves was banned in 1984 but it was still permitted in the stations.

We remember the 31 people who died at #KingsCross fire #onthisday in 1987 including Station Officer Colin Townsley. pic.twitter.com/XzSxQhnulO

A passenger had discarded a match as they ascended on one of the wooden escalators and it fell through the cracks and lit a large pile of garbage which had accumulated underneath.

The fire burned away without anyone noticing and then suddenly a "flashover" occurred – possibly whipped up by the drought generated by an incoming train — and engulfed the escalator and the ticket hall above.

One of the victims, a homeless man, Alexander Fallon, was only identified in 2004.

The fire led not only to a complete ban on smoking in the London Underground but also to the phasing out of wooden elevators and several other safety improvements.

On December 5, 2009 a pyrotechnics display in the Lame Horse nightclub in the Russian city of Perm went wrong, catching light to the roof.

The fire spread rapidly and video footage showed the 300 people in the club desperately tried to get out. In the video the MC, who had been compering a competition, suddenly says:

"We are on fire. Please leave the premises."

Around 111 people died that night, and another 45 succumbed to their injuries in hospital over the next few days. Sadly the fire was not the first caused by pyrotechnics.

In February 2003 a rock band, Great White, set off pyrotechnics at The Station nightclub in Rhode Island, US, leading to a fire which killed 100 people. The Russian government reacted quickly to the disaster, forcing the resignation of officials in the city of Perm and prosecuting the club’s owner Anatoly Zak and several others.

In April 2013 Zak was jailed for nine years and several others held culpable were also sent to prison.

Most nightclub owners around the world now recognize the dangers of indoor pyrotechnic displays but in 2015 they were blamed for a blaze at the Colectiv nightclub in Bucharest, in which 64 people.