Gulf States Have Reasons for Concern Over US Democratization Policy - Putin 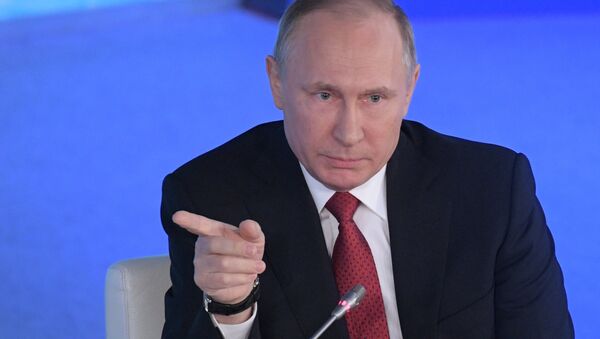 © Sputnik / Grigoriy Sisoev
/
Go to the photo bank
Subscribe
Vladimir Putin said that the Gulf states have a reason for concern because of the policy of democratization implemented by the United States.

Tillerson Cancels Mexico Trip to Continue Bid to De-Escalate Qatar Crisis
NEW YORK (Sputnik) — Russian President Vladimir Putin said in an interview with US film director Oliver Stone that the Gulf states have a reason for concern because of the policy of democratization implemented by the United States.

"The United States tries to democratize everyone else. And I don't think that the monarchies of the Persian Gulf like that very much. To be honest, if I were in their place, I would think about what the United States is going to do next. And I think they are thinking about that already. Indeed, if you are consistent about your course towards democratization, so you understand what your next step is going to be after Syria, after Libya, after Egypt," Putin said.

Vladimir Putin also said that it is necessary to preserve the territorial integrity of Syria and reconcile the parties to the conflict.

"There are many variants and scenarios, but we have always assumed there is a need to preserve the territorial integrity of Syria. Because we have to think not just about pacifying the region at this very moment, we have to take the next step and look further into the future. What happens if we divide Syria? Wouldn't it lead to a permanent confrontation between these parts that have been divided?" Putin said answering Stone's question about potential solution to the Syrian crisis implying partition of the Middle Eastern nation into several parts.

Russian President also said that the statements that Russia would eventually be engaged in a conflict with the Sunni world are nothing but provocation.

"There were always those who said that we would be in conflict with the Sunni world sooner or later. I think this is, to me a provocation. Many in the Arab world, and in Turkey, they do understand what our intentions are. There are those who disagree with that. But our position is clear. Our goal is to support the legitimate authorities, to prevent a disintegration of the Syrian statehood, otherwise this territory is going to be yet another Libya or worse. Or another Somalia. Secondly our goal is to fight terrorism. And this is no less important to us," Putin said.