Trump Embroiled in War With US Political Elite Over Russia Policy 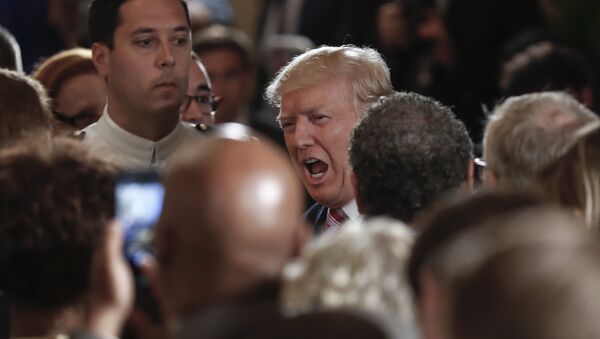 © AP Photo / Carolyn Kaster
Subscribe
Analysts claim that Donald Trump is involved in an intense conflict against the US foreign policy elite in his bid to improve relations with Russia.

Revealed: Mueller's Team Heading Trump-Russia Probe Donated Big to US Democrats
WASHINGTON (Sputnik) — President Donald Trump is involved in an intense conflict against the US foreign policy elite in his bid to improve relations with Russia, analysts told Sputnik.

"I think President Putin is correct: We are seeing a battle of elites here in the country and it is all over policy towards Russia," University of Illinois Professor of International Law Francis Boyle said on Thursday

Boyle observed that in his testimony on Wednesday before the House Foreign Affairs Committee (HFAC), Secretary of State Rex Tillerson said he was trying to negotiate with Russian Foreign Minister Sergei Lavrov a solution to the conflict in Ukraine.

However, Republican and Democratic hardliners in Congress, especially in the Senate were trying to push through new sanctions against Russia to destroy the new peace initiative, Boyle pointed out.

"The Senate just approved a new package of sanctions on Russia… We see the Democratic Party, the Hillary Clinton people and the US news media and it also appears the CIA and the FBI, the pillars of the Deep State are lining up against improved relations," he said.

The hostility against reducing tensions with Russia was reminiscent of the most dangerous period of the Joe McCarthy anti-communist hysteria of the early 1950s, Boyle recalled.

"NSA [National Security Agency] is doing all the leaking. They are lining up for continuation of the Obama aggressive policies on Russia. This is a very dangerous situation," he said

Tillerson made it clear in his HFAC testimony that on May 10 he was discussing Ukraine with Lavrov, Boyle noted.

"They are trying to set up a new process with Russia to resolve the conflict. Now it appears that Trump and Putin through Tillerson and Lavrov hope to take matters into their own hands," he said.

How Obama’s State Department Sabotaged Trump Efforts to Calm US-Russia Relations
Tillerson had made clear that the US government was prepared to work with Russia directly to bypass the Minsk process to try and resolve the Ukraine conflict, Boyle added.

"But these elite factions are fighting back. They are determined to prevent it," he said. "That is why you are seeing this furious fight back."

"The US Congress is presently regarding the relationship with Russia as one of hostility. The US Congress is calling for more sanctions against Russia. It would be helpful if, instead, cooperation could be sought on the range of issues that confront the world right now," he said.

However, world peace would be better served if Russia and the United States could develop a common approach on Syria, Quigley suggested.