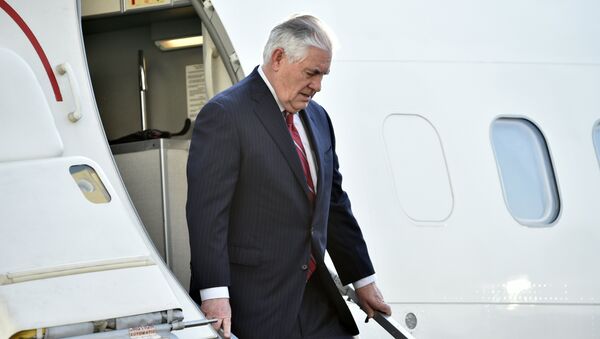 The State Department said that the Secretary of State Rex Tillerson called off a planned trip to Mexico next week to focus his efforts on resolving a crisis between Qatar and other Arab states.

'US Desire to Receive Money From Persian Gulf States' Behind Qatar Crisis
WASHINGTON (Sputnik) — US Secretary of State Rex Tillerson called off a planned trip to Mexico next week to focus his efforts on resolving a crisis between Qatar and other Arab states, the State Department said in a press release on Friday.

"Deputy Secretary of State John J. Sullivan will travel on Monday, June 19 to Cancun, Mexico to represent the United States at the General Assembly of the Organization of American States meeting. The Secretary of State will continue his efforts to de-escalate tensions in the Middle East region through in-person meetings and phone conversations with Gulf and regional leaders," the release stated.

On June 5, Saudi Arabia, the United Arab Emirates, Bahrain and Egypt broke off diplomatic relations with Doha and stopped all communication with Qatar, accusing it of supporting terrorism and interfering in their internal affairs. Later, the Maldives, Mauritius, and Mauritania also announced the severance of diplomatic relations. Jordan and Djibouti reduced the level of their diplomatic missions in Qatar. Senegal, Niger and Chad announced the withdrawal of ambassadors.

Since the crisis erupted, Tillerson has made more than a dozen phone calls and participated in several face-to-face meetings in a bid to resolve the row, the State Department said, adding that the secretary of state would continue such efforts.