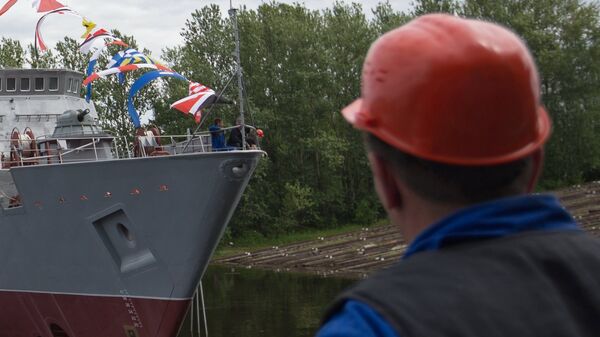 © Sputnik / Igor Russak
/
Go to the photo bank
Subscribe
The new Alexandrit-class (Project 12700) Ivan Antonov minesweeper for the Russian Navy is planned to be launched in 2018, the shipbuilder reported Friday.

India Left With Four Minesweepers Against Chinese Subs, Experts Fear for Safety
ST. PETERSBURG (Sputnik) — By now, both the assembly and structural enforcement of the Ivan Antonov have been completed. The ship will then be retrieved from the assembly rig in which it was built, and the finishing works, as well as installation of various systems and machinery, will be completed, the shipyard which is part of the United Shipbuilding Corporation (USC), said.

"After the reconstruction of the slipway, which is being carried out as part of the shipyard's modernization, is completed, in 2018, the shipyard plans to float the vessel out, conduct all kinds of tests and transfer it to the customer," Sredne-Nevsky Shipyard said in a statement.

The construction of the Ivan Antonov — the second ship in the series — formally began on January 25.

The Project 12700 vessel was designed by Almaz Central Marine Design Bureau and represents a new generation of mine defense vessels. The ship is designed to search and destroy mines in the water areas of naval bases at safe distances. The 44-member-crew vessel is 67 yards long, 11 yards wide, displaces 890 tonnes and can reach speeds of up to 16.5 knots.

Russian Navy to Receive Georgy Kurbatov Minesweeper in 2019
During the construction of these vessels, the latest Russian technologies and solutions are being used. The ship is equipped with the latest means of mine detection, has high maneuverability and sea-keeping performance. It is a unique minesweeper with the world's largest hull, which is made of monolithic fiberglass and shaped by the vacuum infusion technology. The advantages of fiberglass against low-magnetic steel are longer service life and lighter weight.

The lead ship of the Project 12700, named the Alexander Obukhov, has been built and handed over to the customer in 2016n and is already in service in the Navy. An additional two vessels are currently being built. The shipyard plans to lay down the fourth minesweeper of Project 12700 for the Russian Navy.

In December, the Russian navy said it had contracted for another seven Alexandrit-class coastal minesweepers on top of the four ordered earlier, with plans for a total of over 40 vessels to be commissioned in the longer term.