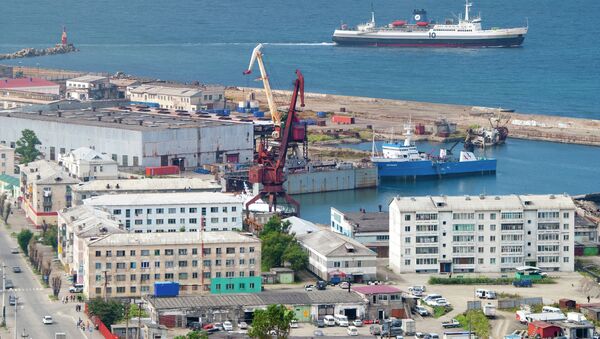 © Sputnik / Sergey Krasnouhov
/
Go to the photo bank
Subscribe
Russian Transport Minister Maxim Sokolov expressed hope Friday that a transport link connecting mainland Russia with the Sakhalin Island would be built before 2030, as it is fixed in the state’s transport development strategy.

Putin: Russia Considers Constructing Bridge to Sakhalin Island in Far East
HERAKLION (Greece) (Sputnik) – On Thursday, Russian President Vladimir Putin said during his annual "Direct Line" Q&A session that the Russian authorities were discussing the possibility of Sakhalin bridge construction, with estimated costs amounting to about $4.97 billion. Putin noted that the ideas of the bridge construction date back as far as the 1930s-1950s.

"The project of the transport route construction, there are two variants of the construction [bridge and tunnel], is [included] in the Russian transport development strategy until 2030. I hope the project will be implemented within the time frame specified in the strategy," Sokolov said, confirming that the ministry was considering the issue.

Sokolov noted that in case Japan "activated the ideas" on building the route between Sakhalin and the Japanese island of Hokkaido, there would emerge a transport corridor, which would allow transfer of approximately 40 billion tonnes of goods per year.

Special Presidential Representative for Environmental Protection, Ecology and Transport Sergei Ivanov said at the Russian Investment Forum in February that the launch of discussions on the bridge between Sakhalin and Hokkaido would be possible given the construction of the route connecting the mainland and Sakhalin. Tokyo announced the intention to pay the cost of the bridge between Sakhalin and Japan back in 2001.