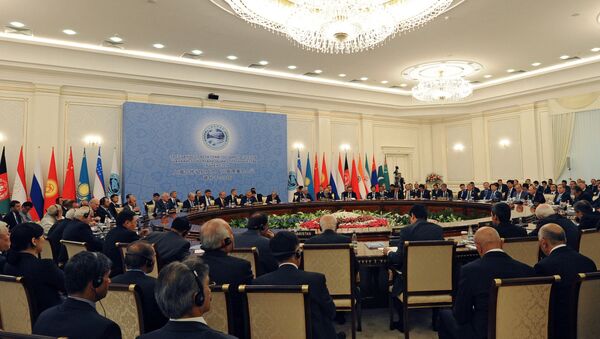 © Sputnik / Mikhail Klementiev
/
Go to the mediabank
Subscribe
International
India
Africa
China on Thursday dismissed fears that India and Pakistan’s differences could disrupt the Shanghai Cooperation Organization (SCO), while outlining that the group’s charter prohibits members to bring their hostility into SCO. Experts said India and Pakistan will benefit from SCO membership.

The ceremony was also attended by China’s Assistant Foreign Minister Kong Xuanyo, who responded to a question that India-Pakistan tensions could have a negative effect on SCO.

Russian, Iranian Foreign Ministers Meet on SCO Summit Sidelines
The two South Asian envoys also joined a customary ceremony of beating a huge SCO cooperation drum heralding the admission of their respective countries into the grouping.
Experts agreed with India’s Ambassador Gokhale that “SCO is important for India as it consists of China, Russia and Central Asian states… and it can also help India and Pakistan to resolve their differences.”

“India and Pakistan may benefit from the memorandums of obligation, signed under the aegis of the SCO, which includes provisions for joint military drills. While Indian and Pakistani militaries have worked together in a few UN peacekeeping operations, for the first time they will participate in regular joint military exercises in close formation as SCO members. Most importantly, their militaries will train together in countering terrorism, a menace for which they often blame each other. There also exists well-structured mechanisms for sharing information and intelligence through the RATS, which could help them build mutual appreciation and understanding in the long run," Prof. Singh adds.

India and Pakistan were formally admitted as members at Kazakhstan capital Astana at the SCO Summit held on June 8-9.