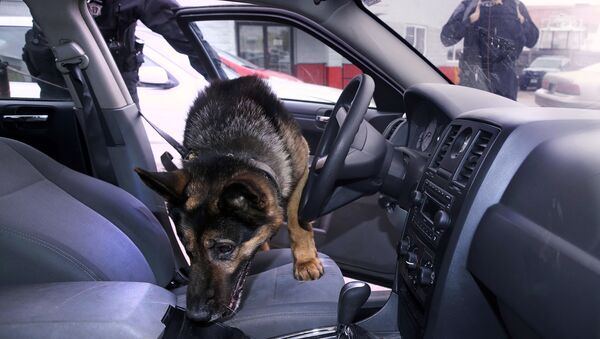 There is no denying that dogs are man's best friend. To prove this, the Finnish Academy of Border Guard and Coast Guard is currently training the world's first "passport-sniffing" dogs.

Man's Best Friend: Finnish Cancer-Sniffing Dogs to Diagnose Dreadful Disease
The duo of Alsatians Ceijo and Rudy, both currently guarding Finland's longest border with Russia, will become the first ones to be taught how to recognize the smell of passports, the Finnish newspaper Aamulehti reported.

As a rule, all service dogs receive a specialization in addition to basic training. Most often it implies means of facilitating arrest or drug search. As part of a new pilot project by the Finnish Border Guard, unique passport-sniffing skills have been added to this set.

According to Rudy's mentor Jari Salonen, dogs are able to distinguish the faintest of scents under various conditions. During the training process, four-legged border guards are drilled to pick out the scent in question despite all interference that can possibly knock them off the trail.

"A normal working day lasts eight hours. During this time, the dog checks a stretch of six to eight kilometers of the border. In case of trespassing, the dog traces the person and points to objects that may have possibly fallen on the ground," Jari Salonen explained.

Meet Billie: Britain's Sperm Sniffing, Rapist Catching Canine Cop
In addition to their basic skills, "passport-sniffers" will thus learn to detect the smell of IDs, as paper, ink and identification marks all have their own unique scent. The catch for the four-legged guards is not be thrown off by the fact that a document usually passes through many hands during various checks.

According to border security expert Lieutenant Colonel Jussi Napola, dogs will be able to detect smuggled documents quickly and efficiently.

"Both authentic and counterfeit documents are being shipped across borders for various purposes, such as illegal entry or other misuses," Jussi Napola told the Finnish daily Helsingin Sanomat.

​However, the career prospects of Ceijo and his fellow document sniffers so far remain uncertain. The pilot project ends at the end of the year, whereupon the experience will be evaluated by the Border Guard, which will also decide whether it will be continued. If deemed successful, passport-sniffers will report for duty at Helsinki-Vantaa airport, as well as various border crossings and ports. Should the experiment be abandoned, the dogs will return to their old duties.

Broken Hömelö: Finnish Police Shoot Sociable Moose Calf Dead
Meanwhile, Finland is no slouch when it comes to training highly specialized sniffers. In 2014, retriever Massi, Finland's first "money" dog, discovered smuggled cash to the tune of 13,000 euros after only a week in service.

In addition to guarding the border and helping the police, Finnish dogs are known for aiding in civilian life as well. Specially-trained four-legged sniffers are trained to detect malignant tumors in patients and mold in Finnish homes.