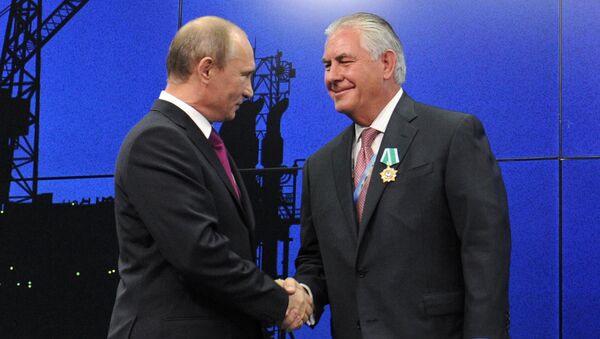 © Sputnik / Mikhail Klimentyev
Subscribe
International
India
Africa
Exchanging barbs with the US administration of Donald Trump, insulting someone is "the worst path," Moscow and Washington should work together, Russian President Vladimir Putin said at his annual "Direct Line" session.

MOSCOW (Sputnik) — The Russian leader mentioned a number of fields for potential cooperation between the two states, in particular, fighting against poverty and negative impact on environment.

"Fighting the negative impact on the environment and so on. Although we now know the position of the current administration about the Paris agreement, President Trump does not refuse to discuss this issue, by the way. To begin arguing with the [US] administration, exchanging barbs, offending each other is the worst path, because then we will not agree on anything at all, and without the United States there is no point in negotiating in this field as the United States alone is one of the largest emitters," Putin said.

The president added that cooperation in the fields of nonproliferation of the weapons of mass destruction and fight against poverty were extremely important.

"We have many issues on which we must work together. But it does not depend only on us. We see what is happening in the United States. And I have already said and want to repeat it again, it is a clear sign of the aggravation of an internal political struggle, and we cannot do anything about this, we cannot influence this. But we are ready for constructive dialogue," Putin said while answering a question on whether the sides would manage to change the decline in bilateral relations after a possible meeting of the two presidents at the upcoming G20 summit.

According to Putin, both Russia and the United States are extremely interested in normalizing bilateral relations.

"I assure you that in Russia there are a lot of people who respect the achievements of the American people and hope that our relations will eventually come to a normal state, and both we and the United States are extremely interested in it," the president added.

Russia
Putin: 'Russians Do Not Consider US as Enemy', Have Many Friends There
Moscow has long been promoting the idea of fruitful cooperation with Washington.

Donald Trump has repeatedly advocated establishing a political dialogue with Moscow, particularly in regards to the fight against terrorism, and expressed readiness to build positive relations with Russia.