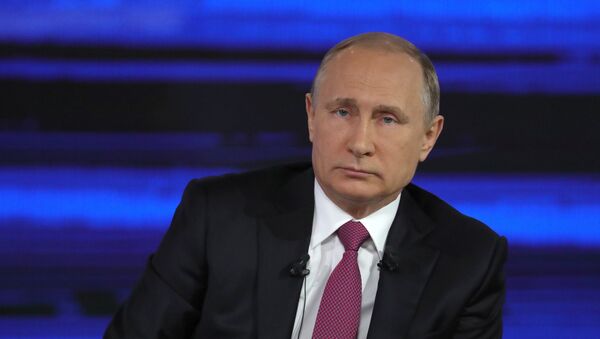 The US Senate's tighter sanctions against Russia came seemingly out of nowhere and for no reason, Russian President Vladimir Putin said Thursday during his annual session "Direct Line" call-in session.

MOSCOW (Sputnik) — The Senate voted 97-2 on Wednesday in favor of an amendment that tacks the new Russia sanctions onto a bill censuring Iran over its ballistic missile program. The Senate must still vote on the amended Iran sanctions bill before passing it on to the House of Representatives and then to President Donald Trump for final approval.

"We know that a new bill appeared in the US Senate about tightening sanctions [against Russia]. By the way, why? Nothing extraordinary is happening at the moment. Why did [they] start talking about these sanctions again, out of the blue?… This is a manifestation of the ongoing internal political struggle in the United States, nevertheless, it is happening I think out of the blue," the president said.

Senate Blocks Trump's Ability to Lift Anti-Russia Sanctions to Be on 'Safe Side'
The new sanctions were proposed as a response to Russia's alleged meddling in the 2016 US presidential election. They would target Russia’s defense, intelligence, railway, mining and shipping industries. They would also restrict dealings with Russian banks and energy companies.

Moscow has repeatedly denied allegations of meddling in the US election.