Putin: Russia 'Has Many Friends in Ukraine' 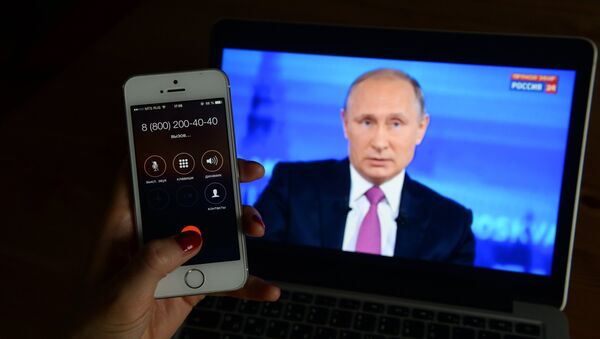 © Sputnik / Alexander Kryazhev
/
Go to the mediabank
Subscribe
International
India
Africa
Moscow is trying not to interfere in the domestic political processes in Ukraine, President Putin said. Russia has a lot of friends in the country.

MOSCOW (Sputnik) — Russia is trying to not interfere in the domestic political processes in Ukraine, country's President Vladimir Putin said at his annual "Direct Line" session.

"I cannot agree that everyone being painted with the same brush. We generally try not to paint anybody black. But such an excessive, public support, we are simply afraid to inflict damage on you in this way and try not to interfere in the domestic political processes in Ukraine," Putin said when answering a question from a man called Dmitry from Ukraine on why Russian TV channels paint the supporters of Nazi-aligned World War II-era nationalists Stepan Bandera and Roman Shukhevych and those who "honor the memory of their grandfathers and participate in the Immortal Regiment" with the same brush.

Russia has many friends in Ukraine, the Russian president stated.

"We have many friends in Ukraine," Putin said and singled out Viktor Medvedchuk, the leader of the opposition movement Ukrainian Choice, calling him an "ardent supporter of Ukrainian independence."

"I met him [Medvedchuk], when he was the head of the administration of [then-Ukrainian] President [Leonid] Kuchma… I think that he is a Ukrainian nationalist. He does not like this definition, he considers himself an enlightened patriot of Ukraine. But it is no secret that his father was an active participant in the Organization of Ukrainian Nationalists, was convicted by a Soviet court and sent to Krasnoyarsk region, where Medvedchuk was born. He has his own position on the independence of Ukraine. He is certainly an ardent supporter of Ukraine's 'nezalezhnost' [Ukrainian for 'independence']," Putin said.

The president added that at the same time Medvedchuk was in favor of a good relationship with Russia.

"[Medvedchuk is] for economic integration, if not some sort of a union. He says that it is not rational to destroy the advantages we have inherited from the past, meaning shared infrastructure, shared power supply lines, shared financial capabilities. And [he] believes that economic cooperation is not only possible, but logical… He is not the only one to think so," Putin said.