Putin: 'Sometimes People Try to Deceive Me, Which I Will Never Forget' 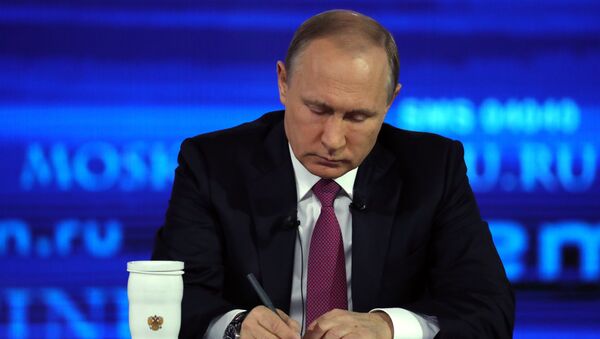 © Sputnik / Mikhail Klimentyev
/
Go to the mediabank
Subscribe
International
India
Africa
Vladimir Putin said he tries to understand the motives of someone who may deceive him.

MOSCOW (Sputnik) — Russian President Vladimir Putin said Thursday during his annual "Direct Line" call-in session that he sometimes found himself in situations when people tried to deceive him.

"Everyone sitting here has the experience when somebody tried to deceive him [or her]. You have it, I have it, just everybody has it. It never happens that nobody tries to deceive us. I am also a human, sometimes people try [to deceive me] too," Putin said.

The president added that he tried to understand the motives of the person doing this before reacting on an attempt to trick him.

"But I will not forget this [attempt]," Putin stressed.