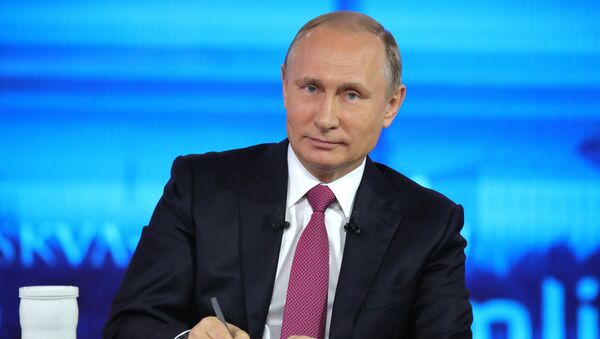 © Sputnik / Mikhail Klimentyev
/
Go to the mediabank
Subscribe
International
India
Africa
President Putin has wrapped up his 15th annual Q&A session. This year it lasted four hours and he answered 73 questions. As usual, the most commonly-asked questions dealt with social issues, however there were many interesting ones regarding Russia's international relations policy and, of course, some about the President's personal life.

President Putin's record of 2013, when he fielded questions submitted via phone, text or online for four hours and 47 minutes, has not been beaten, as well as the number of questions he answered then (85, including 24 rapid-fire questions). This year, however, the President seemed to be more personal, even when he answered questions which weren't personal in nature. Sputnik has chosen the most interesting answers from the Russian leader. 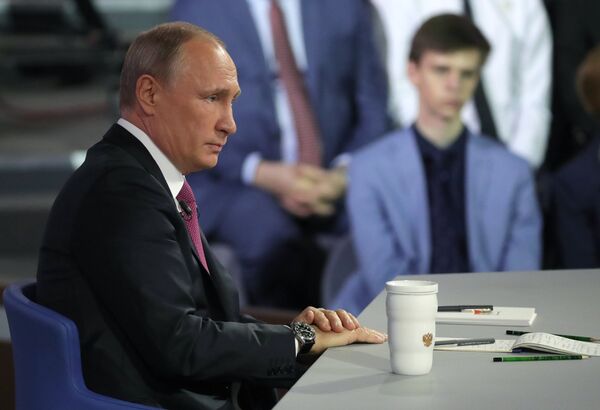 On the relations with the US

'Russia Has Many Friends in the US, But Media Hysteria Exerts Influence on People's Minds'

Opinion polls show that Russia has many friends in the United States; however, hysteria in the media is likely to affect the mindset of US citizens, Russian President Vladimir Putin said when answering a question from a US citizen. 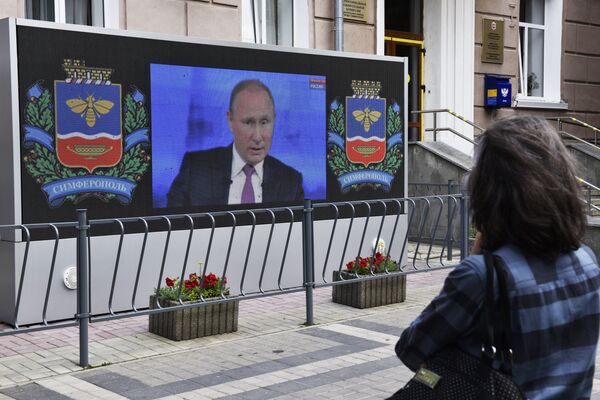 "We know that we have a lot of friends in the United States. I was told about this by my US colleagues, and opinion polls, held at least a month ago, say that we have many friends there. Unfortunately, however, such hysteria in the media certainly affects the mindset," Putin said.

The president added that Russia does not regard the US as its foe. There were a lot of people in Russia who respected the achievements of the people of the US and hoped that Russian-US relations would eventually normalize. 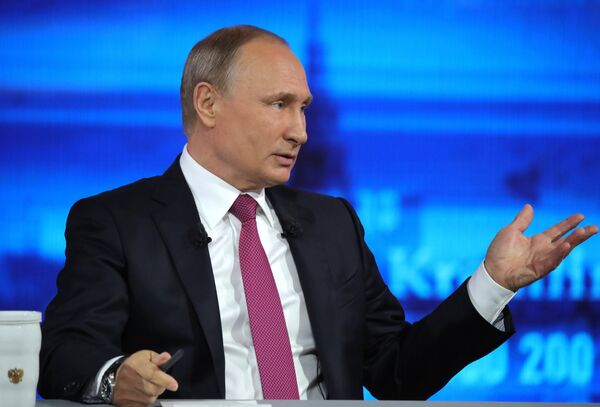 The US tries to sway public opinion — it is them who tried to influence Russia's hearts and minds through different NGOs.

"Take a globe: wherever you put a finger, the US has its interests there," the President said. 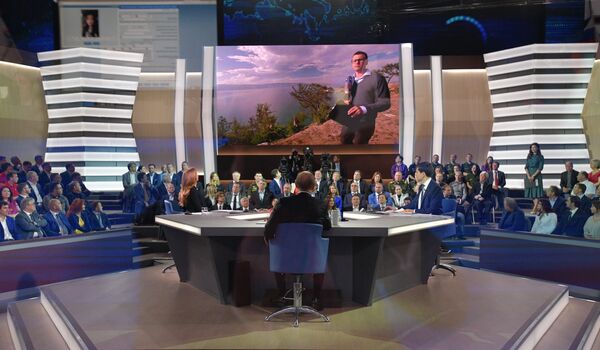 Meanwhile, Vladimir Putin assured that Russia is ready to grant asylum to former FBI Director James Comey if he is persecuted in the United States.

"He said he had recorded his conversation with President [Donald Trump] and handed over this recording to the mass media with the help of a friend. This sounds strange. When a special service head records a conversation with the commander-in-chief and then gives it to the media through his friend. What is then the difference between the [former] FBI director and [Edward] Snowden? Then he is not the head of a special service, he is a human rights activist defending a certain stance. If he [Comey] is persecuted, we are ready to grant him political asylum in Russia, he should know about it," Putin said.

On relations with Ukraine 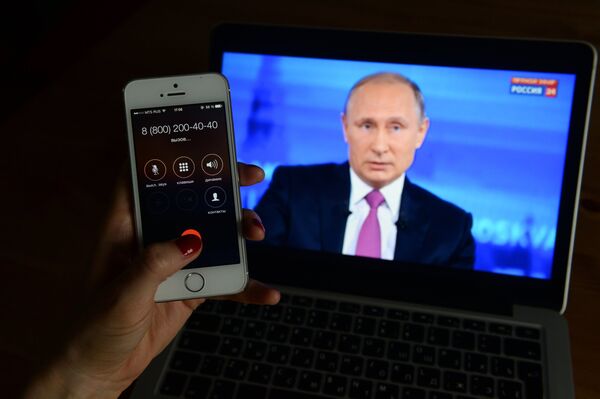 One person from Kiev asked why Russia has abandoned the people of Ukraine, adding that not all citizens are Bandera followers; to this Vladimir Putin said that Russia has many friends in Ukraine as well.

He also commented on Poroshenko's Saturday address, in which the Ukrainian leader congratulated his compatriots on the establishment of a visa-free travel arrangement with the European Union and quoted Russian poet Mikhail Lermontov's famous lines: "Farewell, farewell, unwashed Russia, the land of slaves, the land of masters, and you, blue uniforms of gendarmes." 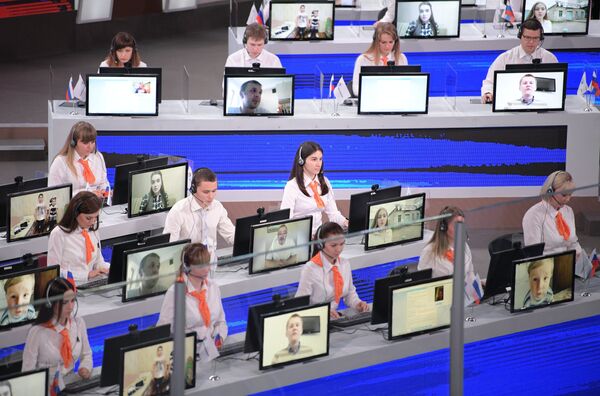 The Russian leader advised Poroshenko to stay alert on his way to the European Union, where he is likely to meet more "gendarmes" than in Russia.

"By the way, if you remember, it says 'and you, blue uniforms of gendarmes, and you, the people obedient to them,' and there, where he [Poroshenko] is heading, there are more blue uniforms than we have, and he should not relax… he should stay alert. At the same time, I want to say that we have nothing against those guys… We have nothing against you, we wish you love and harmony, and good luck," Putin said.

"Lermontov was on his way to the army, actively engaged in military operations in the Caucasus region, he was moving from one part of the Russian empire, from St. Petersburg… to another part, he was actually not leaving [the country]. Maybe, [Poroshenko] is signaling to us in this manner that he is also not going anywhere, but he does it subtly… he tells us, 'Guys, I have interests in Russia, I am not actually not going anywhere.' But this is, of course, a bold guess," Putin said. 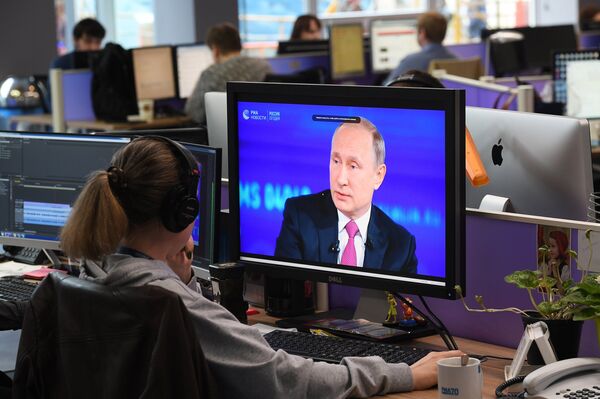 "In reality, [Poroshenko] most likely wanted to show his electorate that he was fulfilling the promises he had given, making a civilized choice, as they call it now, leading his country to Europe," Putin said.

However if Poroshenko wants to be truly European he should close his off-shore accounts first, Putin concluded.

Commenting on the developments in the Arctic, the President said that Russia should deploy a missile launch control system in the Arctic region due to the activities of US submarines approaching Russian borders in the region. 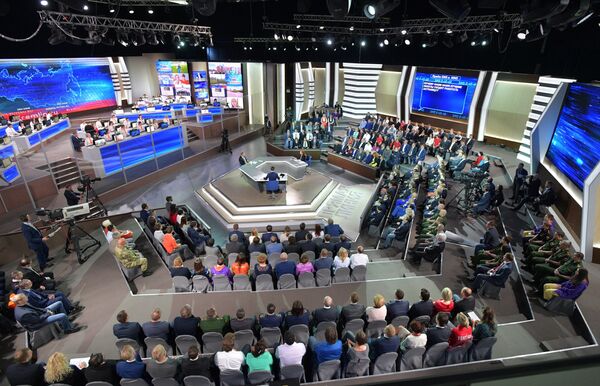 The Russian leader added that Moscow had not paid enough attention to the region of the Arctic, however the situation has changed.

"Sometimes people try to deceive me"

The  Russian President said that he sometimes found himself in situations where people tried to deceive him. 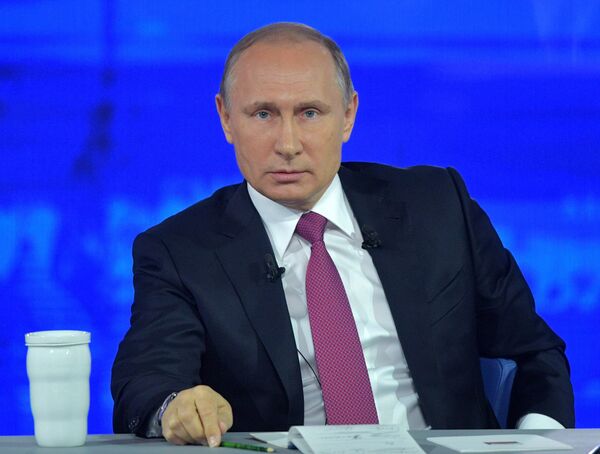 "Everyone sitting here has the experience where somebody tried to deceive him [or her]. You've had it, I've had it, everybody has had it happen. It never happens that nobody tries to deceive us. I am also a human, sometimes people try [to deceive me] too," Putin said.

The Russian leader added that he tried to understand the motives of the person doing this before reacting to the attempt to trick him.

"But I will not forget this [attempt]," Putin outlined.

'I want [my grandchildren] to grow up as regular people'

Vladimir Putin said during his Direct Line that he does not talk about his grandchildren because he wants them to grow up as regular people, interacting with other children, and not as some kind of "royalty." 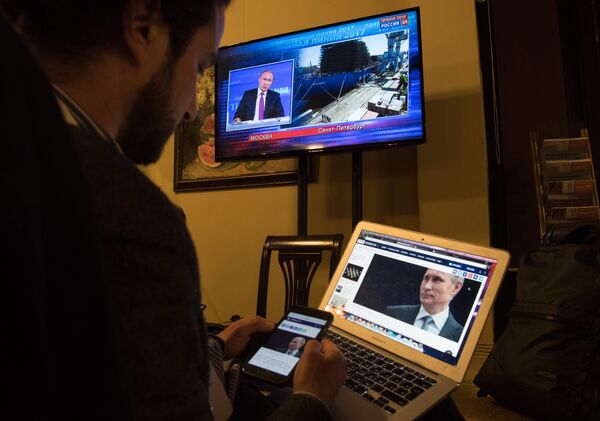 "You see, I do not want them [grandchildren] to grow up as some kind of 'royalty,' I want them to grow up as regular people. They need regular communication, communication with other children for these means. As soon as I mention [their] age, name, they will be identified at once, they will not be left alone. It will be detrimental to the children's development," the President said.

Where would he go if he had a time machine

A 12-year-old girl asked the President: "If you had a time machine, where would you go?"

Vladimir Putin responded that he would prefer to be a passive observer and not want the opportunity to change anything in the past or in the future. Although he would be very interested to observe how St. Petersburg was built and how the Great Patriotic War was won.

Do you know how ordinary people live in Russia? 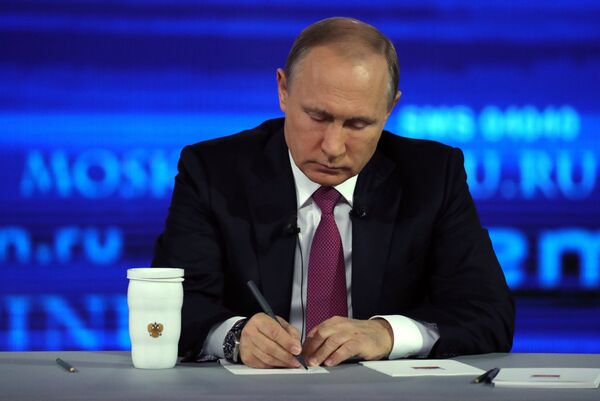 "Of course I do." "I still can't leave lights on if I leave the room — old habit," the President responded.

What was the biggest fish you ever caught?

"20 kilos, though some still doubt the exact weight," the President said.

Which leader has the strongest handshake?

"The strength of a leader is measured not by a handshake, but by his dedication and attitude to the destiny of his people, by dedication in the course of exercising his powers," the Russian leader said.