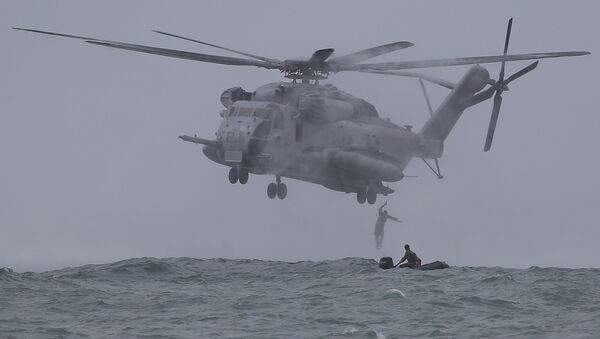 © AP Photo / Aaron Favila, File
Subscribe
International
India
Africa
Iranian ships directed a laser at a US Super Stallion helicopter flying over the Strait of Hormuz on Tuesday. Such behavior is "unsafe and unprofessional," a US Navy spokesman said.

Two US Navy ships from the Fifth Fleet sailing into the Persian Gulf were greeted by Iranian ships, which came within 800 yards of one of the US vessels and shined a bright spotlight at them and their accompanying chopper.

The US Navy wasn’t pleased. "Illuminating helicopters with lasers at night is dangerous as it creates a navigational hazard that can impair vision and can be disordering to pilots using night vision goggles," Commander Bill Urban said on Wednesday.

The US Marines’ Super Stallion fired warning flares in response, according to Military.com, but no people were hurt or property damaged during the event.

Meanwhile, Iranian drones have become a regular nuisance for US vessels transiting one of the world’s most significant waterways

The incident is a microcosm of a much larger feud between Washington and Tehran. On Wednesday, the Senate passed a bill that lumps together sanctions against Iran with similar measures imposed on Russia—a rare moment of bipartisanship for Washington. Hawks in Washington have long blamed Iran for instability in the Middle East despite a concrete email trail from former Secretary of State Hillary Clinton telling confidants that Saudi Arabia and Qatar have funded Daesh (ISIS) and other extremist elements in the Middle East.

Geosecurity risks in the Strait of Hormuz: What’s at stake?

The Strait of Hormuz is a "chokepoint" for 20 percent of the world’s oil, according to the US Energy Information Agency. More than one-third (35 percent) of all seaborne traded oil flows through the Strait of Hormuz annually, heightening the risk of shortages, should conflict erupt between US and Iranian ships, or any naval forces for that matter.

Chokepoints are "geographically-constrained routes, potentially vulnerable to disruption, that carry large volumes of oil, gas, or both," the Brooking Institution’s Robin Mills wrote in a 2016 report.

The US became the world’s largest oil producer in 2014, according to geopolitics expert and Eurasia Group founder Ian Bremmer, while the US took the top spot in natural gas production in 2010. “More than three-quarters of the oil passing through the strait today is headed for Asia," Bremmer wrote in his book "Superpower." "Just 12 percent is headed for the Americas, and eight percent for Europe," Bremmer added.