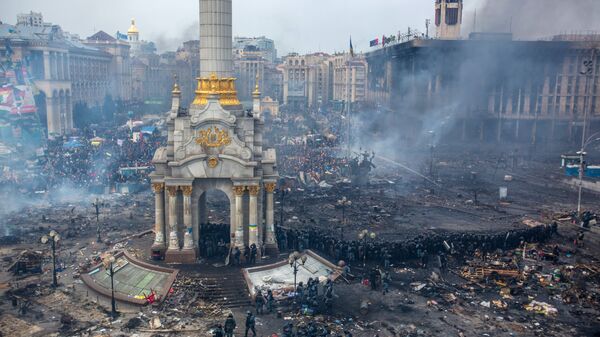 On Tuesday, political specialists from the Moscow-based advisory group Foreign Policy presented their report on four possible scenarios for the further development of Ukraine. Sputnik Radio discussed the suggested scenarios with political analyst Vladimir Zharikhin, who also explained what the US has already completed in the country.

Ukraine's Visa Free Travel to the EU: At What Price Does It Come?
On Tuesday, Nikolai Silaev, Senior Researcher at the Moscow State Institute of International Relations and Research Director for Foreign Policy, and Andrei Sushentsov, the Valdai Club’s Program Director and a managing partner with Foreign Policy presented their report on four possible scenarios for the further development of Ukraine.

Russia's Kommersant newspaper obtained a copy of the analysis. The authors suggest that both a large hot war and a comprehensive political settlement of the Donbass separatist crisis are equally unlikely to happen in Ukraine in the nearest future.

They put forward the four scenarios they deem possible for the future of the country, based on the assumption that Ukraine will take a back seat in the agendas of the major players – the US, EU and Russia. The authors specifically note that there are no longer people who are interested in Ukraine within US President Trump's circle, as Joe Biden and Victoria Nuland had been during the Obama administration.

"Without the supervision of the US, the government in Kiev resumed its military and political experiments in Donbass in January-February 2017," the paper notes.

"The Ukrainian crisis continues to evolve within the boundaries of the constants defined by the spring of 2015: a large hot war is unlikely, the settlement [of the crisis] is frozen, and the Minsk agreements remain the basis of the political process," the newspaper quotes the report as saying.

Cold Rolled Facts: Ukraine No Longer Top-10 Steel Maker, Metallurgy Sector Dying
The first of the scenarios, entitled "movement in the rut", suggests the retention of political stability in the country at its current level and ongoing support of the Ukrainian government by the West. The Western leaders, however, silently recognize the weakness of President Poroshenko, the failure of any reforms and the escalating struggle between different political forces.

A large-scale offensive of the Ukrainian army in Donbass is unlikely as Kiev fears its defeat.

The second scenario, "Kiev on a trailer," suggests internal political destabilization in the country. In its mild form, it is a confrontation between the President and the new country's parliament, due to be formed after early parliamentary elections. In its acute form, it evolves into massive street protests, including armed conflicts, the threat of a coup and the collapse of government agencies.

Under this scenario, the settlement in Donbass is fully blocked, amid an increased risk of the resumption of large-scale military operations. In this case the West can become hostage to its own sluggish foreign policy regarding Ukraine.

In the third variant, "Collapse and indifference," the US and EU are less interested in Ukraine. Financial aid from the West is shrinking, and Kiev's authorities face the immediate threat of a new macroeconomic catastrophe. Western mainstream media and politicians criticize Kiev for failed reforms, uncontrolled political violence and the growing influence of radical nationalists.

The summary: the ruling circles lose their key source of power – explicit support from the West. It is no longer possible or becomes very difficult to continue "selling" the conflict in the east of the country as the "defense of Europe from Russian aggression."

The final scenario, "A threat of isolation": the political regime in Kiev maintains stability, however its support from the West is declining. The OSCE representatives, leaders of Germany and France (part of the Normandy Four group) publicly nod and comment on situations when Ukraine's actions contradict its obligations under the Minsk agreements and prevent the settlement of the conflict in Donbass.

"In the rhetoric of the Western politicians, the issue of lifting anti-Russian sanctions is being increasingly separated from the issue of the settlement of the Ukrainian crisis," the report says. However there are no pre-conditions for the early parliamentary elections.  The authorities are still able to keep the country under control. The political influence of the right-wing armed groups is waning. The shelling of Donbass and armed incidents at the line of contact both ebb.

In conclusion, the report suggests that the settlement of the Ukrainian crisis is possible only in the event of a compromise among all the external players. However, the compromise is highly unlikely: Russia does not want Ukraine to be consolidated along Western and anti-Russian lines. The West doesn’t want Ukraine to be consolidated along pro-Russian lines.

Over 10,000 Killed, Nearly 24,000 Injured in Ukraine's Conflict Since 2014 - UN
The Ukrainian government, in turn, will remain divided over the two options for consolidation. Meanwhile, the external players should take into account the possibility of a new spiral of the Ukrainian crisis amid the electoral cycle of 2018. There is every chance for the repetition of the so-called Euromaidan scenario.

"It is in everyone's common interest not to turn Ukraine into a battlefield between Russia and the West," the authors therefore concluded.

Radio Sputnik discussed the report with Deputy Director of the CIS (Commonwealth of Independent States) Institute Vladimir Zharikhin, who suggested that the first scenario is the most probable.

"Unfortunately the Ukrainian leadership has lost its subjectivity, or personality, long ago. I mean that the key decisions in Ukraine are made not by the Ukrainian leaders but by external players. If we suggest that the events will continue to develop in the way they are doing now, the first scenario is the most probable," he told Sputnik.

News Travels Fast: Kiev Furious Over Daily Mail Statement That Crimea is Russian
The political analyst also noted what the US has already completed in Ukraine.

"Any speculations regarding whether the West has become tired of Ukraine and whether it will now leave it alone have no grounds. The Western countries, at least the US, have completed what they were initially after: they have created a simmering conflict in the center of Europe, which can be re-ignited at any time. However, from their point of view, it's best to let it simmer for a while," Zharikhin said.

The expert also pointed out that the Ukrainian conflict won't resolve itself.

"If the Ukrainian authorities try to follow the wisdom of Chinese general Sun Tzu 'If you wait by the river long enough, the bodies of your enemies will float by,' those are irrelevant illusions. They won't float by," Zharikhin said.

The political analyst, however, noted that no matter how paradoxical it sounds, the Ukrainian authorities nevertheless strengthen their authority.

"The Ukrainian leaders are destroying their country, but strengthening their own authority. Through destroying of the remains of the democratic order in the country, tightening their authority and intimidating the population, they consolidate power," he concluded.