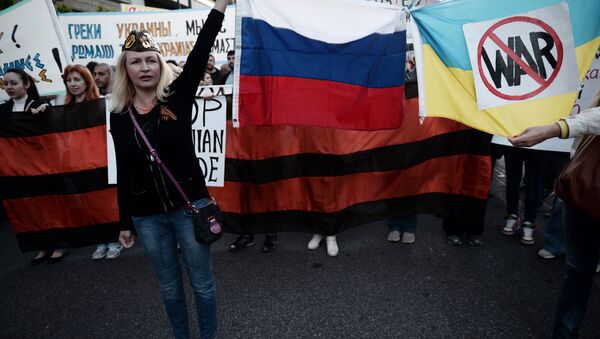 © AFP 2023 / LOUISA GOULIAMAKI
Subscribe
International
India
Africa
Speaking to Radio Sputnik about Ukrainian lawmakers' recent approval of several Russophobic laws over the last couple of weeks, Ukrainian-Russian politician Vadim Kolesnichenko emphasized that that that it's always important to remember that Ukrainian officials and ordinary Ukrainians are worlds apart when it comes to their attitudes toward Russia.

On Monday, Ukrainian President Petro Poroshenko signed into law a bill banning the use of the Ribbon of St. George, a symbol of victory in the Great Patriotic War which is commonly used in commemorative celebrations in Russia and throughout the former Soviet Union.

Carrying, manufacturing, or promoting the ribbon is now punishable by a fine of up to 2,550 hryvnia (about $100 US), and repeat 'offenders' face more severe penalties up to and including arrest.

Ukrainian President Signs Bill Banning St. George's Ribbon
Poroshenko justified the decision by claiming that the ribbon was not a symbol of World War II, but "of aggression against Ukraine in 2014-2017."

The 'Ribbon of St. George' law was one of several anti-Russian laws passed by Ukrainian authorities in recent weeks. Last week, authorities further tightened language quotas on shows and movies broadcast by Ukrainian television. A week earlier, officials announced that Kiev had worked out the legal mechanisms for introducing a visa regime with Russia, a decision which Moscow said would have catastrophic consequences for the country's economy, since it is highly dependent on remittances from Ukrainians living and working in Russia.

Asked for comment, Vadim Kolesnichenko, a Ukrainian and Russian politician and the chairman of the presidium of the Internal Council of Russian Compatriots, told Radio Sputnik that the law on the ribbons of St. George was an integral part of Kiev authorities' Russophobic policy.

"We understand that this is, in effect, a form of intimidation, and a demonstration of hatred of one's own past," Kolesnichenko said. "Unfortunately, this kind of law is an integral part of Kiev's broader Russophobic policy."

"The task is very simple," the politician noted, and consists of "running from Russia, running from our common past." At the same time, Kolesnichenko stressed that it was always important to emphasize that Ukraine's present authorities and the country's ordinary population are "two separate entities" when it comes to attitudes toward their eastern neighbors, and the two countries' common history.

Cold Rolled Facts: Ukraine No Longer Top-10 Steel Maker, Metallurgy Sector Dying
The politician also noted that petty actions like banning the Ribbon of St. George conflict with Kiev's commitments to Brussels regarding the freedom of speech and freedom of expression.

Unfortunately, Kolesnichenko said that Europe is unlikely to pay any attention to Kiev's latest anti-Russian outbursts.

"It's necessary to clearly understand that Europe, unfortunately, will not react to these glaring violations. This, undoubtedly, is a disgrace for Europe, which is considered to be a highly refined and intellectual place. But at the same time it is profitable for them, because it means the destruction of the Soviet and Russian past, and of Ukraine's Russian roots. This is an attempt to build a new statehood, a state ideology, through intimidation and blackmail," Kolesnichenko concluded.