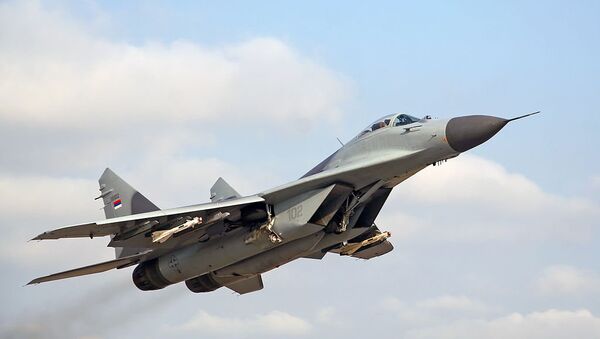 © Photo : Krasimir Grozev
Subscribe
Serbia's deal with Russia for the procurement of six MiG fighter jets and the modernization of an additional four from the existing Serbian fleet is a great deal which enables Belgrade to update its air force with quality planes at a lower price than neighbors in the region, Nenad Miloradovic of the Serbian defense ministry told Sputnik Srbija.

Why Buying MiG-29 Fighter Jets From Russia is Exactly What Serbia Needs
In March, Russian President Vladimir Putin and Serbia's then-Prime Minister, President Alexander Vucic, signed a deal for the sale of six MiG-29 fighter jets as well as the modernization of another four planes.

At a meeting on the sidelines of the Astana Expo exhibition last week, Putin told Vucic that the new aircraft will be delivered by mid-July, a source told the Serbian newspaper Vecernje Novosti.

Nenad Miloradovic, Serbia's Assistant Minister of Defense, told Sputnik Srbija that the sale is a great deal for Belgrade, enabling it to modernize its fleet at a much lower cost than neighbors in the region.

"We are getting six MiG's from Russia for free, while the financial package includes modernization and repairs for them and four which the Serbian air force already has, which will prolong their service to a period of 30 years. We are buying extra equipment for maintenance over the next 14 years, plus we are getting modernization that will be carried out in three phases. For what we are paying, we are getting real quality, in comparison to what our neighbors have, above all regarding Western planes," Miloradovic said. 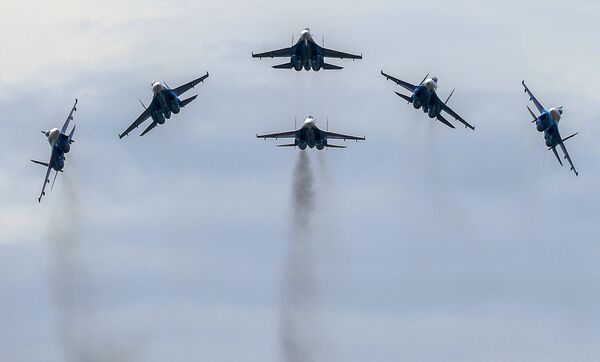 The performance of the Strizhi aerobatic team in MiG-29 jets during a show at the ARMY 2015 International Military-Technical Forum held outside Moscow
© Sputnik / Alexander Vilf
/
Go to the photo bank
Belgrade received exceptional terms for the sale, which includes repairs and upgrades to the planes. The cost will amount to 185 million euros ($207 million), including the cost of fuel storage facilities, hangers to store ten planes and the complete maintenance and modernization of the planes' missiles.

"Apart from the planes, which will be modernized to the level of 4+ generation fighter jets, Serbia will receive for free the most advanced R-77 medium-range missiles with radar guidance as well as aerial bombs. Taking all this into account, the modernization of our air force is going to cost us three to five times less than other countries in the region."

"During these 50 years, we got all our infrastructure and equipment from Russia (then the USSR). That's why the decision to continue using the MiG's is absolutely justified. After all, this way it takes us a lot less time and resources to re-equip pilots and technology than if we had turned to Western models. In addition, if we're talking about military specifications, the Russian planes are just as good as the Western ones," Katanic said.

The twin-engine MiG-29 fighter jet has become the main fighter used by the Russian air force since it was first introduced in 1983, and it is in use in 25 countries worldwide. Production of the 4+ generation multi-role MiG-29SMT fighter began in 2004, which is equipped with additional fuel tanks, upgraded engine and increased weapons carriage capacity. It is equipped with the enhanced Zhuk-ME radar, which is able to track up to ten air targets and fire missiles at four targets simultaneously.

000000
Popular comments
Just CAREFUL. As they intend to JOIN E.U and NATO and then TRY a neutral STUNT , that won't work. Be very careful as NATO will grab all this for training and more. Is the ONLY danger. Would be nice IF they sign into CSTO and EEU!! n
cast235
14 June 2017, 15:37 GMT1
000000
Cost effective equipment. Russians tanks also give you a good bang for the buck.