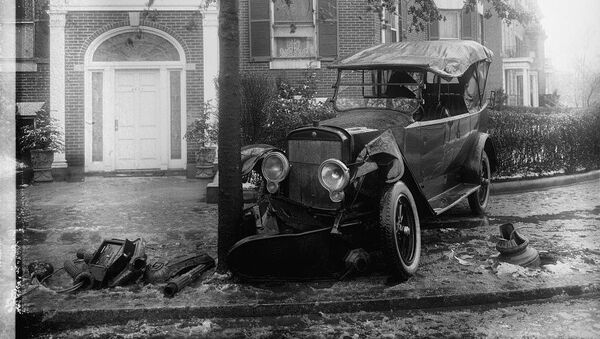 © Photo : Library of Congress
Subscribe
A man in northwestern China’s Jilin province has turned an old Volkswagen Jetta into an armored “zombie vehicle,” equipped with spears on its rims and model machine guns on its hood. Overall, it resembles a car that has just escaped from battle, what with its rusty surface and rough body.

Here is How NOT to Drive a Car
The owner of the vehicle is Zhou Di, a 35-year-old man who runs a workshop that produces industrial-style commodities in Jilin. Inspired by the movies "Mad Max" and "Death Race," Zhou decided to modify the vehicle himself. He bought the scrapped Jetta about two months ago, and soon removed its engine and gearbox. Later, he installed steel bars above the wind shield, which cover most of the passenger side and leave only a small peep hole.

Zhou has also made defensive body kits and armor for the vehicle. Most of its "weapons" are made from spare parts of old cars and motorcycles. It took Zhou nearly a month to complete the modification, he said.

A fan of machinery from a very young age, Zhou began to repair electric vehicles after his graduation. He later opened a barbershop and restaurant, both decorated in an industrial style. However, the machinery enthusiast eventually changed his profession, opening a workshop that sells handmade industrial-style commodities.

Zhou said he likes his unique car, and he hopes to expand it into a series in the future, creating pick-ups and off-road vehicles.