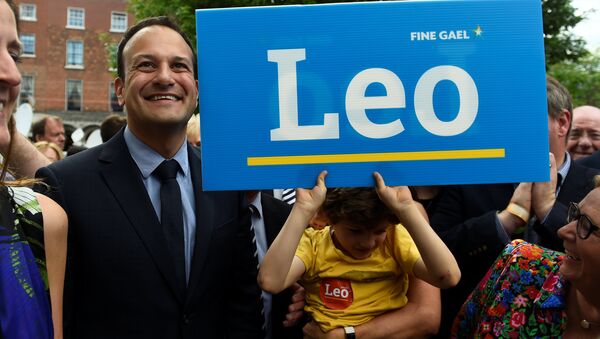 Leo Varadkar has become Ireland’s youngest Prime Minister, succeeding Enda Kenny. An openly gay man with an Indian father, his rise to power shows how much the Republic of Ireland has changed in recent years.

​Ironically Varadkar's appointment as Taoiseach comes only days after the Democratic Unionist Party (DUP) — which has managed to block gay marriage in Northern Ireland — was brought in to prop up British Prime Minister Theresa May, after she fell short of a majority in Parliament.

He was elected by 57 votes to 50 in the Irish Parliament, the Dail.

The Opposition party, of Fianna Fail, led by Micheal Martin, abstained in order to allow Varadkar to take over as Taoiseach.

In 1993 the Irish Republic was a strictly Roman Catholic state where homosexual acts were illegal and the population was overwhelmingly white and ethnically Celtic.

But in 2017 Varadkar's sexuality was not even an issue and nor was his ethnicity — his father, Ashok, a doctor, was born in Mumbai.

Unelected PM Theresa May does a deal with homophobic and racist DUP. pic.twitter.com/fGntyuVV0m

Civil war raged in the south between the Irish Free State, led by Michael Collins, and the remainder of the IRA which refused to accept the division of Ireland.

Ireland Passes Historic Legislation Legalizing Gay Marriage
Fine Gael, which means "Tribe of the Irish" in the Gaelic language, was eventually formed in 1933 out of a number of parties on the Free State side.

Kenny, who had led the party since 2002, stepped down as Fine Gael in May and Varadkar beat his nearest challenger, Housing Minister Simon Coveney, who was from Cork.

​Homosexual acts were legalized in 1993 and in 2015 Ireland voted in favor of same-sex marriage.

Varadkar, who had spells as Transport and Health Ministers, was Minister for Social Protection until this week but has been criticized for what some believe has been a vendetta against poor people on benefits.

Over the next few months it will remain to be seen whether Fianna Fail continue to support Fine Gael in power.

If they pull out the rug Varadkar will be forced to call an election and if he loses it, he will be the prime minister with the shortest reign in Irish history.