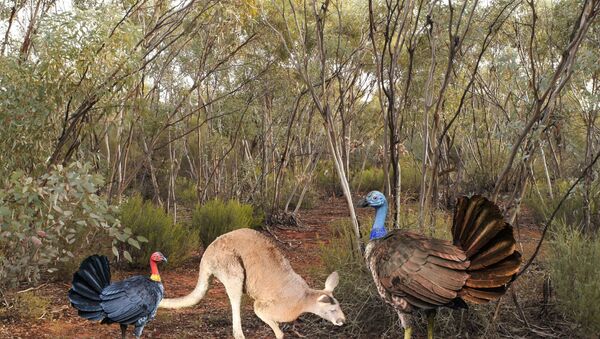 © Photo : Artwork by E. Shute, from photos by Tony Rudd, Kim Benson and Aaron Camens
Subscribe
A giant, flying turkey as tall as a kangaroo roamed the wilds of Australia during the Pleistocene era, between 1.6 million and 10,000 years ago, palaeontologists from Flinders University in South Australia have announced – a shock discovery that adds to the ever-growing list of weird and wonderful extinct species.

The Pleistocene era was a time of major upheaval in Australia, with fluctuating climates, the arrival of humans, and the extinction of many colorful creatures. A new paper documents five such beasts — a group of stocky chicken-like birds with small heads and large feet — that once populated different parts of Australian territory.

​All are — or were — relatives of living megapodes, such as the Malleefowl and Brush Turkey, although much heavier. While modern Malleefowl only weigh around two kilograms, the perished birds weighed up to eight kilograms.

Unlike other large extinct birds like the dodo, all five had a strong flight apparatus, and they probably flew into trees to roost and to escape danger just as living megapodes do today.

One of the "tall turkeys" was even equipped with an upturned tail bone, indicating it sported a large, ornamental tail. This species also had a long, narrow tip to its beak, suggesting its diet was significantly different to the other birds'.

Researchers — including famed Victorian naturalist Charles De Vis — had initially believed the fossils, first found in the 1880s, represented a single ancient bird, but the Flinders University team's examination revealed the bones belonged to entirely different species. Beyond identifying previously undiscovered species, the finding is further seismic as it over half of Australia's megapodes went extinct during the Pleistocene era.

Finding 'Faceless Fish': Ugly Species Feared Extinct Discovered in Deep Ocean
The bones studied originated from sites across the land down under, including the farming region of Darling Downs in Queensland, caves in New South Wales and South Australia, Curramulka Quarry in the Yorke Peninsula, Warburton River and the Nullarbor Plain, Western Australia. Given the geographical diversity of the sites, it's evident the birds could thrive in diverse climatic and environmental habitats.

Contemporaries of the birds included extinct, giant marsupials such as the diprotodon, marsupial lions and short-faced kangaroos, and others still alive today, such as the Malleefowl.

What remains unclear is why the large megapodes died out, but the smaller birds survived. The researchers aren't certain, but circumstantial evidence indicates at least one of the discovered species was still present in Australia by the time humans reached the continent, only to die out entirely within a few thousand years of their arrival.

Moreover, larger animals usually reproduce more slowly than smaller ones, making them vulnerable to changes in climate and/or new predators. It may be sharply rising temperatures in the "lucky country" were too much for the birds.

The quintet of birds uncovered by the researchers could only be the tip of the iceberg, however. It's uncertain how many, if any, more unfortunate branches of the same ancestral tree may have been shorn permanently — discovery of new bones, or reassessment of previous discoveries, may reveal the mainland was home to a whole host of unexpected fiends.

000000
Popular comments
It still is only now they call themselves politicians.....