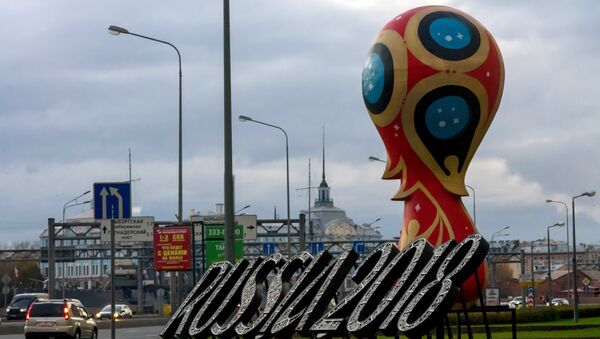 Yevgeny Ivanov, the head of the Russian Foreign Ministry's Consular Department, confirmed to Sputnik in an interview that foreign football fans possessing tickets to the 2017 Confederations Cup, as well as to the 2018 FIFA World Cup held in Russia will not need visas to attend.

MOSCOW (Sputnik) — In April, the Russian parliament adopted amendments to the country's legislation, easing the process of football fans to enter Russia from other countries during the Confederations Cup and the FIFA World Cup. On May 1, Russian President Vladimir Putin signed a law amending the corresponding legislation.

"In order to ease entry for foreign football fans to Russian territory during sports events such as the 2017 Confederations Cup and the 2018 FIFA World Cup, Russian legislation has been amended. [Under these amendments] they would need only a passport and a fan ID in print copy. Therefore, foreign football fans would not need to attain visas," Ivanov said.

Stan Collymore Looks Ahead to FIFA Confederations Cup in Russia
The official added that people would be able to obtain fan IDs either via mail or through different football associations and clubs, while citizens of the countries that already have visa-free regimes with Russia could receive the documents on Russian territory.

The 2017 Confederations Cup will start on Saturday and will continue until July 2. The 2018 FIFA World Cup will be held from June 14 to July 15 in 11 Russian cities, including Moscow, St. Petersburg, Kaliningrad, Rostov-on-Don, Sochi and Volgograd.