Emergency Security Incident Forces Lockdown at US Air Base in California 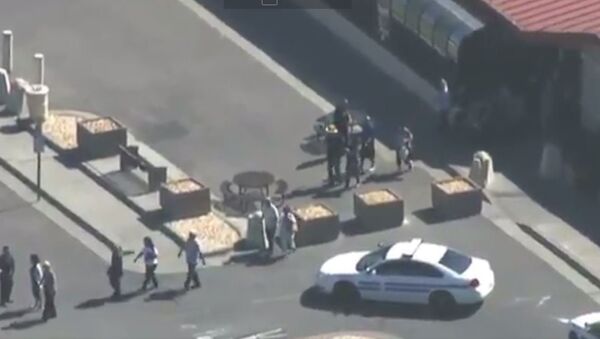 © NBC Bay Area
Subscribe
The Travis Air Base responded to a "real world security incident" on Wednesday, prompting the base to issue a safety alert and lock the entire base down. Witnesses said that officials told them there was a gunman on the loose. The base later confirmed that reports of a shooter were false, though the lockdown lasted for several hours.

​The shooter was reportedly seen near the base's shopping plaza.

​"The public is being asked to stay away from the base to ensure emergency responders can respond accordingly," the Travis Air Force Base said in a statement Wednesday afternoon.

No injuries have been reported, according to a local NBC affiliate.

​People on the base were ordered to lock all their doors and windows, according to base's Twitter account. For several hours, no one could enter or exit the base via car, local media reported, as people were escorted out of base buildings.

​A drill had been scheduled to take place around the same time, but the "current security incident is not associated with the scheduled base exercise," according to the base's official Facebook page.

​A flurry of possible shootings unfolded around the US on Wednesday. A Congressman was badly injured in Alexandria, Virginia, in a shooting that left four others wounded. Four individuals were slain at a UPS facility in San Franciscio, about an hour's drive from Travis Air Force Base. Another gunman open fired in Brooklyn, New York, on Wednesday as well.

Officials have just reported the situation to be "all clear."