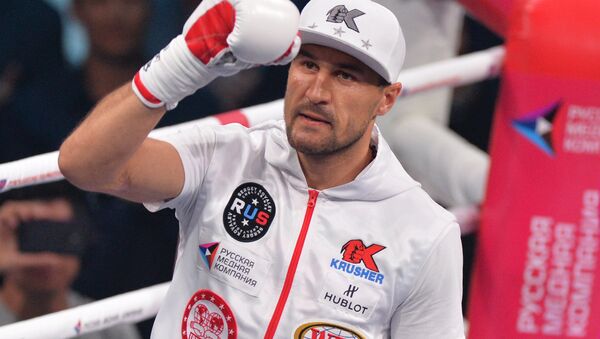 Although Golovkin is from Kazakhstan, his father is Russian. The heavyweight and cruiserweight divisions are stuffed full of Russian fighters – Alexander Povetkin, Alexander Ustinov, Denis Lebedev, Murat Gassiev, Andrey Fedosov – and there are a number of young tyros coming through who might make it big, including unbeaten middleweights Artur Osipov and Andrey Sirotkin.

So what is behind the boom in Russian boxing?

Former world middleweight champion Richie Woodhall said the Soviet Union, along with Cuba, had dominated amateur boxing for many years and won lots of Olympic medals.

Professional boxing was banned until the fall of communism.

"Pro boxing in Russia is still in its infancy, but in terms of amateur boxing they have been a colossal nation for years,” Woodhall told Sputnik.

"It’s a massive country and they have lots of boxers and some brilliant coaches. They always do the basics very well and when they box internationally they are used to a variety of styles," he added.

Woodhall said there are many good fighters coming out of the former Soviet Union. They include Vasyl Lomachenko, the WBO super featherweight champion from Ukraine, who is being tipped as a major star.

Hollywood used a Russian as a villain in 1985 – Ivan Drago was the baddie in Rocky IV, who knocked out and killed Apollo Creed but then got beaten (of course) by Sylvester Stallone’s character.

​It took some time, after the fall of communism in 1991, for the first real boxing stars to emerge from the former Soviet Union.

In 1999 Vitali Klitschko, from Ukraine, became a world champion after dethroning Britain’s Herbie Hide for the lightly regarded WBO title, but he and his brother Wladimir would later dominate the heavyweight division.

​Football and ice hockey have always been the most popular sports in Russia and professional boxing events have only recently begun to become popular.

In April, the Boxing Federation of Russia created a new supreme advisory board, which included Igor Sechin, the CEO of Russian state oil giant Rosneft.

Sechin is a big boxing fan and in 2013 he helped bring the world title clash between Wladimir Klitschko and Alexander Povetkin to Moscow in 2013. It was Russia's "Fight of the Decade" and although Povetkin lost, it whetted Muscovites appetites for big-time boxing.

In December 2015 Roy Jones, once the world’s best pound-for-pound fighter, became a Russian citizen and fought Britain's Enzo Maccarinelli in Moscow. Woodhall said the Klitschko-Povetkin fight had been a "clash of styles" and an "awful fight." But that was a huge event in Moscow and there is no reason why they can’t put on big shows and attract big names,” Woodhall told Sputnik. But most boxers from the former Soviet Union still tend to end up based abroad – the Klitschkos in Germany, Golovkin and Kovalev both in the United States.

Woodhall tipped Ward to beat Kovalev on points on Saturday (June 17), but he said it would be a close fight.

"Golovkin against Alvarez will be the fight of the year. Golovkin is a fantastic fighter. He can box on the inside or on the outside and he punches very hard," Woodhall told Sputnik.

"The one thing Kovalev and Golovkin had in common is their long amateur careers. Golovkin had around 200 fights and Kovalev also had a lot. They were well schooled. All those former Soviet countries are well schooled and they are very experienced when it comes to turning pro," Woodhall told Sputnik.