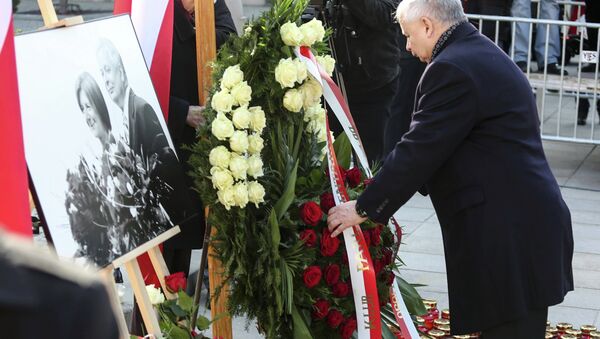 © REUTERS / Agata Grzybowska/Agencja Gazeta
Subscribe
International
India
Africa
The Polish Ministry of Defense has asked prosecutors to launch an investigation into the activities of the commission which investigated the 2010 presidential plane crash over Smolensk, Russia. Speaking to Sputnik, political scientist Igor Shatrov lamented the Polish authorities' shameless attempts to use the tragedy to score political points.

Polish MoD Asks Prosecutors to Look Into Tu-154 Crash Probe Commission
In his interview, Morozov emphasized that the commission had found no evidence of explosives onboard the Tu-154M presidential airplane, thereby refuting the conspiracy theories being floated in Poland by the ruling Law & Justice Party and its leader Jaroslaw Kaczynski. Kaczynski's brother Lech, president of Poland, perished in April 2010, when his plane crashed outside Smolensk, western Russia, killing all 96 passengers and crew on board. In 2011, Polish and Russian investigators each concluded that pilot error and poor weather conditions were to blame for the disaster.

However, the Polish MoD declared Monday that "in connection with information that the commission has on the re-investigation of the accident, and the interview that Alexei Morozov of the Interstate Aviation committee gave to the RIA Novosti news agency…a justifiable doubt has emerged regarding the reliability and validity of the final [2011] report of the [Polish] Committee for Investigation of National Aviation Accidents under Edmund Klich and then Jerzy Miller."

In the years after the crash, conspiracy theories were floated in Poland among political forces hostile to Russia claiming that the accident was really a secret plot by Moscow to assassinate Polish leaders. For years, these claims were brushed off by Warsaw, whose own inquiries found no evidence to back up such allegations. However, in 2015, following election victories by Jaroslaw Kaczynski's Law & Justice party, the conspiracy theories would become government policy.

Warsaw Unresponsive to IAC Proposal to Hold Meeting on Tu-154 Crash
In 2016, Warsaw launched a new inquiry. The new investigation claims that the president's plane began to break up in the air, and that one of the most likely explanations for the crash was thermobaric explosives going off inside the aircraft, an idea that both Russian and Polish investigators from the earlier investigations have described as ludicrous.

Asked to comment on the Polish MoD's appeal to prosecutors, political scientist Igor Shatrov told Radio Sputnik that it seems, unfortunately, that keeping the presidential plane crash in the limelight has become somewhat of a permanent domestic political factor in Poland.

"The investigation into the presidential plane crash is being used by Jaroslaw Kaczynski, the brother of the deceased president, in his own interests," Shatrov said. "Jaroslaw regularly reminds everyone of this, thereby increasing his political influence and demonstrating 'who is the boss'."

New, Never Before Seen Evidence on Polish Presidential Plane Crash Uncovered
"It's worth recalling," the observer added, "that on the tenth day of every month, the presidential palace in Warsaw sees the so-called Smolensk processions. Representatives of the ruling party, led by Jaroslaw Kaczynski, are able to remind the [2010-era] government of their 'responsibility' for the catastrophe, and of Russia's 'sinister role' in this situation. In this way, they gain political dividends."

Ultimately, Shatrov emphasized that while the real causes of the disaster were conclusively determined a long time ago, the current authorities in Warsaw seem to have no interest in finding out the truth, but only in finding new ways to make political insinuations, against their domestic political opponents and against Moscow.