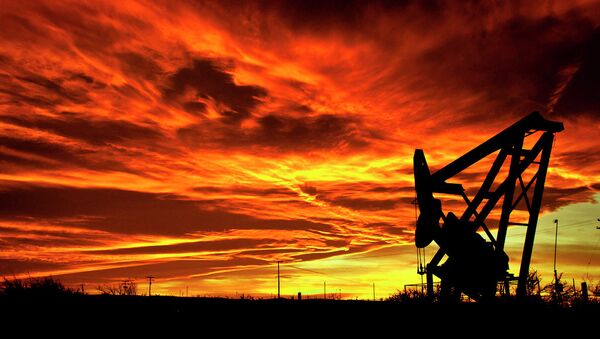 CC BY 2.0 / Justin Vidamo / The Burning of the Sky
Subscribe
The OPEC Reference Basket (ORB) averaged $49.20/b in May, down more than 4% from April to sit at its lowest value for the year, according to report.
All OPEC Members Back Extension of Oil Output Cut Deal - Iran Oil Minister
MOSCOW (Sputnik) — The price of the Organization of the Petroleum Exporting Countries (OPEC) daily crude basket fell 4.2 percent in May compared to the previous month and is sitting at its lowest value in 2017 despite the decision of the cartel and 10 non-OPEC countries to extend cuts in oil production, the cartel said Tuesday in a report.

"The OPEC Reference Basket (ORB) averaged $49.20/b in May, down more than 4% from April to sit at its lowest value for the year. The oil market was range bound and bearish for most of the month, despite the OPEC and non-OPEC decision on 25 May to extend their production adjustments until the end of March 2018," the cartel’s monthly oil report read.

OPEC Cuts Extension Encourages Oil Bulls Amid Asian Supply-Side Concerns
The steep fall in oil prices can be attributed to a slower pace of the global inventory drawdown compared with a boost in global oil supplies, particularly from the United States, according to the OPEC.

World oil demand is forecast to accelerate in the remainder of the year, increasing by 2 million barrels daily (mb/d) and averaging 97.4 mb/d, according to report.

"Global oil demand is forecast to pick up in 2H17. The second part of the year will exhibit a 2 mb/d increase in total consumption in the line with the seasonal average to reach 97.4 mb/d, compared to 95.4 mb/d in 1H17," the cartel’s monthly oil report read.

OPEC forecast for global economic growth in 2017 was improved by 0.1 percent to 3.4 percent despite political uncertainties after parliamentary snap elections in the United Kingdom due to stronger performances by most major economies with the exception of Brexit-impacted London.

"The gradual recovery of the world economy continues and stronger-than-anticipated growth in 1Q17 has lifted the world GDP growth forecast for 2017 to 3.4%, up from the 3.1% growth seen in 2016. This positive momentum is expected to continue into the second half of the year… even with political uncertainties as after recent elections in the UK," the cartel’s monthly oil report read.

"Improving momentum from 1Q17 has been confirmed in most major economies, with the exceptions of the Brexit-impacted UK and potentially temporary dips in the US and India, which are both expected to rebound in the remainder of the year," the cartel added.