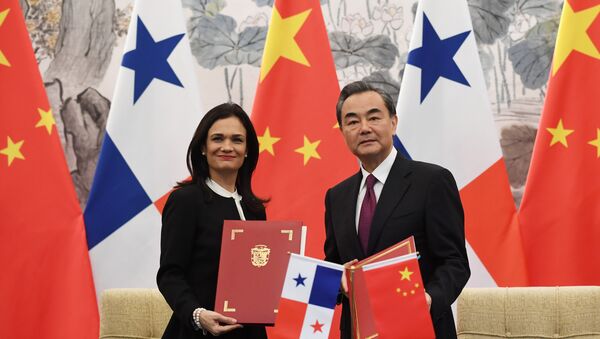 Chinese Foreign Ministry said that Foreign Minister Wang Yi and his Panamanian counterpart Isabel de Saint Malo have signed a communique on establishing official diplomatic relations between the two countries after the latter's recognition of the One China Policy.

"In accordance with the interests and aspirations of the two nations, China and Panama decided to establish diplomatic relations from the moment of signing the relevant communique," the ministry's statement read, adding that Beijing and Panama City agreed to respect each other's sovereignty and territorial integrity.

The sides also agreed on the mutual non-interference, stressing the need to develop friendly relations based on the principle of equality, mutual benefit and peaceful coexistence.

After Chinese Nationalist forces were defeated by Mao Zedong’s Communists, the Nationalist government moved to Taiwan in 1949. Since then, Beijing has viewed the self-ruled island as a breakaway province. The United States, along with many other countries, does not recognize Taiwan as a sovereign nation and sticks officially to the "One China" position, but has kept informal relations with the island after severing diplomatic ties with it in 1979.