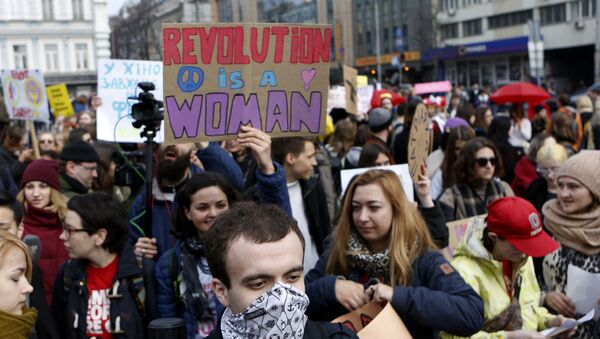 In recent years, Sweden has emerged as a close partner of Ukraine and has pumped millions of kroner into the former Soviet state, which seems to be in a permanent state of crisis. Recently, Sweden has reinforced its reputation as a tireless women's rights campaigner, allocating five million euros to support gender equality in Ukraine.

Feminists Cheer as Ugandan-Swede Is Elected Europe's First Black Party Leader
The official title of the four-year project is "Gender Equality in National Reforms and the Establishment of Peace and Security in Ukraine." The corresponding agreement was signed by UN Women Executive Director Phumzile Mlambo-Ngcuka and the Swedish Ambassador to Ukraine Martin Hagström.

According to Ukrainian Deputy Prime Minister Ivanna Klympush-Tsintsadze, the 5 million euros ($5.6mln) will be used for establishing an integrated national mechanism for gender equality under the government commissioner for gender policy (a newly established office), as well as implementing the national action plan Women, Peace, Security.

Klympush-Tsintsadze stressed that this project will focus on monitoring the current state of gender issues in Ukraine and the dynamics of social changes. In addition, gender advisers in law enforcement agencies will be introduced in order to enhance the capacity and coordination between bodies tasked with ensuring gender equality.

According to the Ukrainian government website, Martin Hagström ventured that quality of life is improved by gender equality, stressing the fact that women constituted a majority of the Ukrainian population, but were under-represented in the bodies of power.

Feminist Sweden Puts on Hijab in Hope of Doing More Business With Iran
In 2015, Sweden's International Development Cooperation Minister Isabella Lövin identified gender issues as one of the foremost cooperation areas with Ukraine, arguing that equality and the increased percentage of women in the labor market was closely linked to prosperity and well-being.

In recent years, Sweden has emerged as the sixth largest humanitarian donor in the troubled country. For Ukraine, which has been plagued with staggering corruption, a crumbling economy, a plummeting currency, massive foreign debt, ultra-nationalism and separatism, many might be expected to question if gender issues should be a top priority. According to OpenAid, an information service about Swedish overseas help, Sweden contributed 27.8 million dollars to Ukraine in 2016. Incidentally, democracy, human rights and gender equality issues were the top priority; they were allocated $12.2mln, which is more than that earmarked for humanitarian aid ($5.9mln), banking and financial services ($3.2mln), energy generation ($2.5mln), education ($534,000) and communications ($486,000) combined.

Sweden is also one of Europe's most active supporters of Ukraine's EU membership as a follow-up to the recent visa waiver. According to the Swedish government, Sweden's cooperation with Ukraine is geared towards increasing the country's integration with the EU. In 2015, the Swedish government offered Ukraine a bilateral loan of 100 million dollars. Perhaps unsurprisingly, a 2014 survey found Swedes most willing to risk conflict with Russia by helping Ukraine than any other Europeans (73 percent as opposed to EU median 58 percent).

Trump Emerges Unscathed From 'Brawl' With Swedish Feminists
Before 2014, Ukraine was a growing market for Swedish businesses. Sweden was ranking among the ten largest investors in Ukraine, with about 100 Swedish companies being active in the county. The low wages in particular triggered a special interest in Ukraine regarding outsourcing.

In addition to Sweden, Ukraine also enjoys massive support from the European Neighborhood Instrument (ENI), whose purpose is to promote peace and economic growth. The ENI has a total budget of around 17 million dollars for the period 2014-2020.