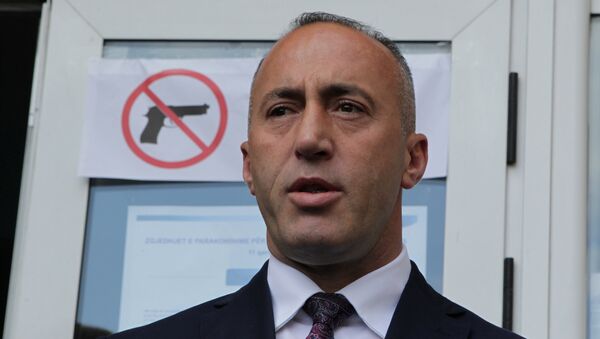 Ramush Haradinaj, a former leader of the Kosovo Liberation Army, is tipped to become the next Prime Minister in Pristina. Haradinaj has been acquitted of war crimes in The Hague, but Serbia still considers him a war criminal, which could jeopardize Kosovo's hopes of joining the European Union.

One of the preconditions of Kosovan acceptance into the EU is for it to improve its relations with Serbia, which currently does not recognize the breakaway state, which is known as Kosovo-Metohija by the Serbs.

​Serbian President Alexander Vucic said: "The so-called war or veteran coalition, which has won most votes in the elections in Kosovo and Metohija, is the group that has most openly threatened Serbs, and that will create a lot of problems for us."

He claimed Serbia would be "protecting the interests of Serbia and Serbs in Kosovo and Metohija."

​Ramush Haradinaj was a former KLA commander who stepped down as prime minister of Kosovo in 2005 in order to defend himself against war crimes allegations.

He was found not guilty at two trials at the international war crimes tribunal in The Hague, but Serbia says it has fresh evidence of his guilt.

It claims he killed ethnic Albanian villagers who were accused of collaborating with the Yugoslavian army.

When he was acquitted Judge Bakone Moloto said the evidence was clear that several Serbs were badly beaten and one even died in a KLA compound in Kosovo.

But he said there was no evidence Mr. Haradinaj was involved.

In the Middle Ages Kosovo was the birthplace of the Serbian nation and in 1389 it was the scene of the Battle of the Kosovo, when thousands of Serbs lost their lives fighting invaders from the Ottoman Empire.

But by the beginning of the 20th century ethnic Albanians had become the majority in Kosovo and after the Second World War Serbs increasingly migrated to other parts of what was then Yugoslavia Serbia proper, or abroad.

​In 1996 the Kosovo Liberation Army (KLA) launched a guerrilla war against what was left of Yugoslavia, which later became Serbia.

Two years later Yugoslavia's President Slobodan Milosevic tried to stamp out the KLA uprising but was accused of trying to ethnically cleanse the province.

Kosovo – Creation of the West That 'Will Now Form the Kosovan Parliament'
Both sides committed atrocities and in 1999 large numbers of Kosovan refugees fled into neighboring Albania and Macedonia.

The Yugoslav Army finally withdrew from Kosovo which, in 2008, declared independence. Serbia, Russia and several other countries, including China, do not recognize Kosovo as a nation.

Last month Kosovan political scientist Nexhmedin Spahiu said Kosovo was the "creation of the west" and it would be the west who would control the parliament.

In January this year French police arrested Haradinaj, on the basis of a Serbian arrest warrant, after he flew in from Pristina.

While he was being held in custody his brother Daut, who is a member of the Kosovo Assembly, reportedly threatened that if he was extradited "not a single Serb would remain in Kosovo."

In April the French authorities decided against extraditing him to Serbia and released him to return to Kosovo.

With 70 percent of ballots counted, his center-right Alliance for the Future of Kosovo coalition has around a third of the votes from the weekend's election, ahead of the left-wing Vetevendosje party.

The Serbian newspaper Blic said it had seen a statement from Kutjim Berisha, an ethnic Albanian, who claimed Haradinaj had taken part in war crimes against both Serbs and Albanians accused of collaborating with the Belgrade regime.

He was interviewed in Montenegro in May 2004, but died in a mysterious car crash in Podgorica before Haradinaj went on trial.

Berisha was allegedly one of 19 witnesses against Haradinaj who have died.