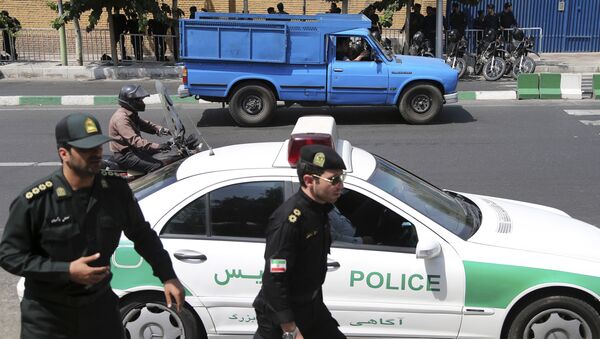 Four Daesh militants were killed in an operation conducted by the police in the mountains near the Iran's city of Rudan on Sunday, according to local media.

According to the Tasnim news agency, citing Brig. Gen. Azizollah Maleki, the militants were killed in an operation conducted by the police in the mountains near the city of Rudan on Sunday.

Weapons and ammunition were seized alongside explosives and a flag of the Daesh.

Iran Police Arrest Eight More Suspects in Tehran Attacks
A foreign identity card was found on one of the militants, while the identities of the three others are not known yet, Maleki said.

On June 7, two coordinated terror attacks were carried out in the Iranian parliament and the mausoleum of Imam Khomeini in Tehran. According to media reports, at least 17 people were killed and some 50 others injured in the assaults. The Daesh reportedly claimed responsibility for both terror acts. On Friday, Iranian media reported, citing the country's intelligence, that the leader of the group behind the attack was killed by the country's security forces.