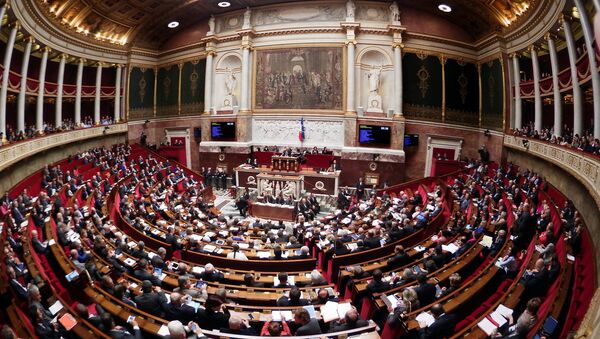 © REUTERS / Charles Platiau
Subscribe
The low turnout in the first round of the French legislative elections shows that the country's elected representative bodies are in a deep "legitimacy crisis," the National Front (FN) party candidate for the eleventh constituency told Sputnik on Monday.

"Why to vote for these legislative, since the government announced it will govern bypassing the national assembly and that anyway a victory of Macronist candidates was expected? There will be no better turnout at the second round, on the contrary, it will be slightly worse. Which means that the totally inexperienced elected member of parliament elected with Macron will have been elected by roughly 25% of the electorate. There is a legitimacy crisis in the French elected representative bodies," Sebastien Cochard said.

Centrist La Republique en Marche party, founded by President Emmanuel Macron, came in first with 28.21 percent of the votes. Pollsters predict that Macron’s party is on course to win as much as three quarters of the seats in the second round.

Cochard, however, argued that the recent results did not reflect the actual popularity of competing political groups.

FN Unlikely to Match Presidential Race Figures With Legislative Seats - Member
First-round results decided only four of the 577 seats on offer, leaving the rest to be fought out on June 18 by two or more candidates who survived elimination.

The right-wing Republicans gained 15.77 percent, while National Front had 13.2 percent and the left-wing La France Insoumise got 11.02 percent. The previously ruling Socialist Party got 7.44 percent.