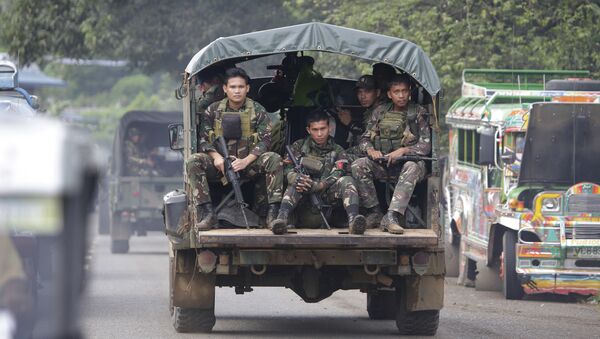 © AP Photo / Aaron Favila
Subscribe
US special forces are helping the Philippines Army as they attempt to get rid of Islamist militants in south of the country, according to a Saturday statement by the US embassy.

The announcement follows remarks by Philippine President Rodrigo Duterte, who previously asserted that he would reduce his nation's acceptance of US military and economic aid and turn instead to China and Russia.

According to the Manila Times, the Philippine Army is struggling to defeat the extremists who are attempting to hold the city of Marawi. Daesh-affiliated militants with the Abu Sayyaf and Maute jihadist groups have used anti-tank weapons and tunnels in the city, and are accused of using innocent bystanders as human shields.

Some 13 Philippine troops were killed on Friday in a street firefight with the extremists, in some of the heaviest fighting of the campaign, according to Agence France-Presse journalists in Marawi.

The US embassy in the Philippines, declining to provide specifics, has announced that American forces are now assisting the embattled Filipino troops in the southern regions of the archipelago.

"At the request of the government of the Philippines, US special operations forces are assisting the [Philippine Army] with ongoing operations in Marawi," stated a US embassy spokesperson.

A spokesperson for the US Army detailed that US forces were not involved in combat, but were "providing technical support."

Some 20 civilians and an estimated 138 extremists have been killed in the ongoing fighting, the Philippines government stated.

Reports on the ground reveal that Daesh tactics are making it difficult for military units to attack without collateral deaths.

"Local terrorist groups are using the mosque, they are entrenched there. They also used civilians as human shields… we are very precise in our operations to avoid collateral damage," stated a Philippines Army spokesperson, according to the Manila Times.

Duterte has declared martial law in the region in his attempt to stop the spread of Daesh.

According to a Saturday statement from the US embassy, Washington will "continue to work with the Philippines to address shared threats to the peace and security of our countries, including on counterterrorism issues."

Some 200,000 have been displaced and 250 killed in the ongoing armed conflict in Marawi, which began May 23.