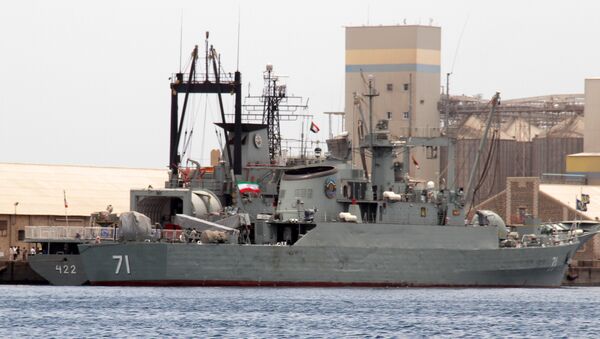 A flotilla of Iranian warships departs for the Gulf of Oman amid an ongoing diplomatic crisis on the Arabian Peninsula.

Iran Supports Iraqi Territorial Integrity Amid Kurdish Independence Bid
"An Iranian naval flotilla will depart to Oman on Sunday and then will go to the north of the Indian Ocean and Gulf of Aden," the public relations of the naval forces of the army said in a statement published on the Iranian Tasnim news agency.

The 47th flotilla, comprised of one destroyer and one logistics warship, began its mission Sunday, after a ceremony attended by naval commander Rear Admiral Habibollah Sayyari.

It will replace its counterpart, number 46, also comprised of a destroyer and a logistical warship, which have been on the open seas for two months, securing naval routes and protecting merchant vessels and oil tankers in the Gulf of Aden.

"Today, there is some controlled insecurity in the Gulf of Aden and we have been able to escort over 4,000 oil tankers and cargo ships to the safe regions without any disruption in our plans for oil and non-oil exports and imports," Admiral Sayyari told Fars News Agency on Sunday.

The move comes amid a crisis in the Gulf after Saudi Arabia, the United Arab Emirates, Bahrain and Egypt cut ties with Qatar for allegedly supporting "extremism."

Doha has denied all allegations, insisting it has been leading the region in attacking what it called the roots of "terrorism." Qatar says it has given young people hope through jobs, educated hundreds of thousands of Syrian refugees and funded community programs to challenge the agendas of armed groups, the news agency reports.

In the meantime, violence continues in the Gulf of Aden as Saudis fight Houthi rebels in Yemen and pirates from Somalia try to profit from the ongoing chaos.