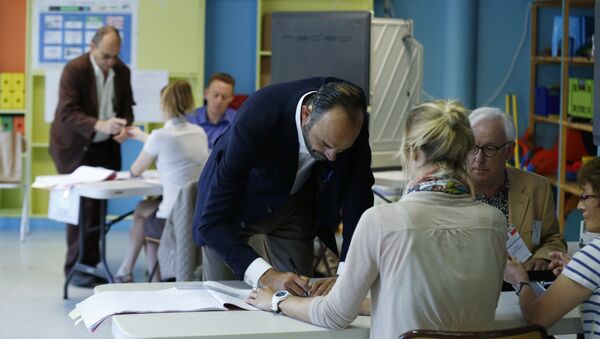 French voters in the country's metropolitan area have started casting ballots in the first of two rounds of a parliamentary election with almost 67,000 polling stations open since 8:00 a.m. Paris time (06:00 GMT).

Italians Vote for Municipal Mayors Ahead of Parliamentary Election
PARIS (Sputnik) — French citizens are electing 577 lawmakers to the country's National Assembly, the lower house of parliament, out of more than 7,800 candidates. The polling stations in Metropolitan France will work until 9 p.m. Those in its overseas areas, including Guadeloupe, French Guiana, Martinique, St. Barthelemy, St. Martin, St. Pierre and Miquelon, started working on Saturday.

Security at polling stations will be provided by 50,000 police and gendarmes, as well as soldiers of the Sentinelle operation, patrolling public venues and transport hubs across the country.

According to  Ipsos/Sopra Steria poll, published on Friday, the alliance of La Republique En Marche party (LREM), founded by French President Emmanuel Macron, and The Democratic Movement (MoDem) could get between 397 and 427 parliamentary seats. The second round of the election is scheduled for June 18.