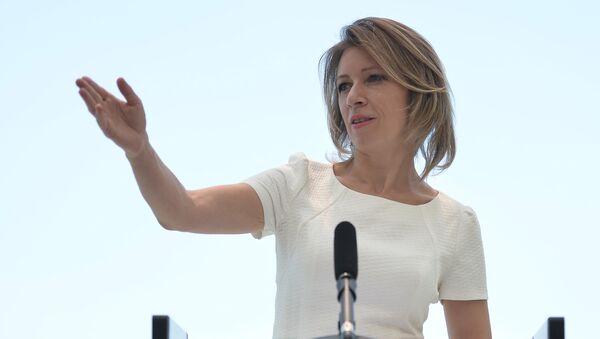 The editorial offices of mainstream media outlets forbid their journalists from going to Crimea as professional journalists will not be able to keep silent to the real situation in the region, Russian Foreign Ministry's spokeswoman Maria Zakharova said on Sunday at a media forum in Crimea's resort city of Alushta.

ALUSHTA (Sputnik) — If mainstream media representatives were allowed to visit Crimea they would not be able to conceal the truth about the situation there, that is why they are forbidden from going to the peninsula, the spokeswoman suggested.

"Foreign correspondents are rational, experienced people. The issue is that their editorial offices prohibit them from going to Russia's regions. This applies not only to Crimea but Crimea is the clearest example," Zakharova said.

Mainstream media outlets have executed political orders and provided biased information, including the consequences of such policy for Europe itself, Zakharova noted.

"We have also suffered from these sanctions but first of all European countries were affected as figures show after two years [of sanctions]," the spokeswoman said.

'It's Stupid to Be Afraid': Italian Politician on Yalta Economic Forum in Crimea
The first international media forum, "Open Crimea by Own Eyes," which gathers Crimean authorities, representatives of lower and upper houses of the Russian parliament, Russian and foreign experts and journalists, has begun earlier in the day and will run until Monday.

Over 90 percent of the region’s residents voted in favor of the reunification in a referendum, the results of which have not been recognized by Ukraine, Brussels and Washington. The Russian authorities have repeatedly said that the people of Crimea have made their choice in a democratic vote in full accordance with international law and the UN Charter.