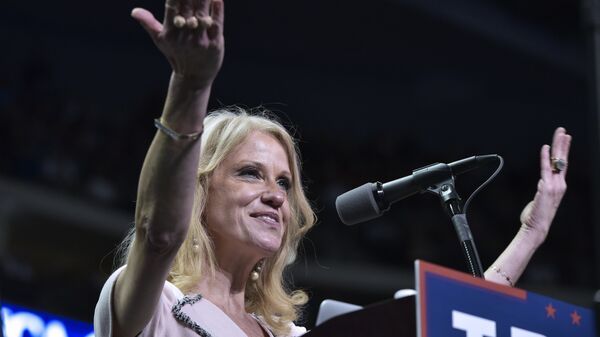 With the White House leaking like a sinking ship, speculation is running wild as to the source behind all the anonymously backed articles causing so much upheaval in the US capitol lately. A new Twitter account alleges — seriously or not, it's hard to tell — that Kellyanne Conway is one of DC's tattle-tales.

US President Donald Trump, following his election, quickly staffed his inner circle with a cadre of vocal and polarizing advisors, Conway among them.

Now, Conway has come under scrutiny for some particularly uninhibited storytelling at an embassy party.

@KellyanneLeaks is now the place to go to see whether any of her musings has resulted in a White House leak, and the account already has nearly 7,000 followers.

The new Twitter account intends to show that every time an article critical of Trump advisor Reince Priebus or other White House staffers is published, it is because someone at a high-level DC social event overheard Conway holding court on her favorite subject: the ineptitude of the rest of the White House.

After catching Conway talking very loudly (and, as the account creator acknowledged, probably off the record) to reporters at a British embassy event in DC, the person behind @KellyanneLeaks had a thought: perhaps this high-volume Trump adviser is one of the culprits?

Conway was overheard mocking White House Chief of Staff Reince Priebus especially viciously, but she also apparently discussed how she chooses to interpret Trump's orders to her. The president told her to say "[formed FBI Director] Jim Comey will have to wait and see about the tapes," she apparently explained to her audience. "I chose to convert that to 'no comment.'"

She also made fun of the White House legislative director and several other prominent GOP figures.

And Conway doesn't seem to be toeing the White House line that everything is fine and dandy and America is rapidly being made Great Again.

With Conway's high-volume party chatter getting its own Twitter account, her work within the Trump administration may soon come to an end. Trump has asked intelligence agencies, including the FBI, to arrest the leakers.