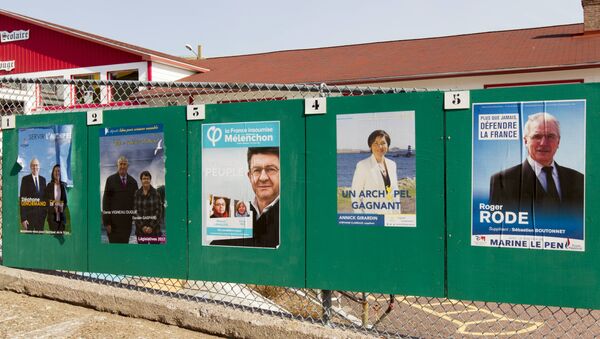 French voters of the metropolitan area will go to polls on Sunday to choose members of the National Assembly, the country's lower house of parliament, in the first round of country's legislative elections.

MOSCOW (Sputnik) — The second and final round of parliamentary elections is scheduled for June 18.

Security at almost 67,000 polling stations will be provided by 50,000 police and gendarmes, as well as soldiers of the Sentinelle operation, patrolling public venues and transport hubs across the country.

The National Assembly consists of 577 directly elected lawmakers with the office term of five years. This year, the French citizens will choose lawmakers out of more than 7,888 contenders, which exceeds the figure for 2012 of 6,500 people, but falls short of an absolute record of 2002 when 8,444 people became candidates.

Former Stripper on the Ballot for French Parliamentary Election
French citizens, who are 18 years old before the first round of the elections, registered voters who have not been barred from exercising their political and civic duties, are entitled to vote. Foreign nationals, including residents of the European Union and other countries, are not entitled to cast ballot.

French lawmakers are elected in two rounds. To win in the first round, the candidate must obtain an absolute majority, but no less than 25 percent of the votes of all voters registered in the constituency.

Lawmakers are elected by a plurality voting system of absolute majority in single-member constituencies. France is divided into 577 constituencies, each populated by the average of 125,000 people. The constituencies are divided in the following manner: 539 of them represent Metropolitan France, 19 — overseas departments, eight — overseas communities, and 11 represent French residents overseas.

For the French living abroad, the vote took place a week earlier, on June 3 and June 4. A total of 717 polling stations were opened for voters with the turnout at reaching 19.1 percent. The second round will be held simultaneously with Paris, on June 18.

Fun Facts and Polls: France Readies for 1st Round of Legislative Elections
Candidates from the La Republique En Marche party (REM), founded by French President Emmanuel Macron won in 10 out of 11 constituencies outside of France in the first round. The only district where the candidate of Macron's movement could not win was the one which includes the countries of the Maghreb.

Prior to the beginning of voting in Metropolitan France, it started in the overseas territories and departments of France. Polling stations for the voters of Guadeloupe, French Guiana, Martinique, St. Barthelemy, St. Martin, St. Pierre and Miquelon opened on Saturday.