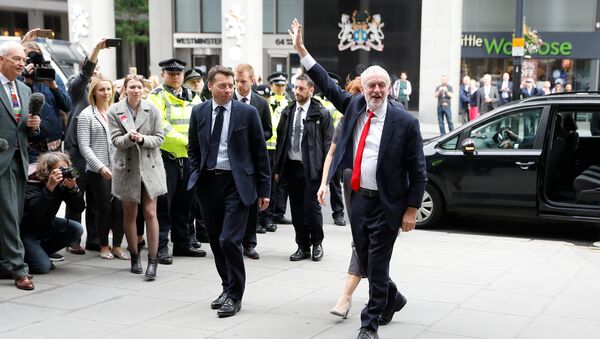 UK Labour Party is "ready to serve" after making gains in the general election, the opposition party's leader Jeremy Corbyn said Friday, pointing out that the United Kingdom's exit talks with the European Union should continue.

LONDON (Sputnik) — On Brexit negotiations, Corbyn said "they are going to have to go ahead because Article 50 has been invoked,"

"We are ready to do everything we can to put our program into operation," Corbyn told Sky News in an interview, saying "we have done no deals or no pacts with anybody, we are there as the Labour Party with our points of view."

On Brexit negotiations, Corbyn said "they are going to have to go ahead because Article 50 has been invoked."

The Labour leader stressed that the UK parliament would have to take a decision on the voting results following the elections.

"When a government puts forward the Queen's Speech, we will put forward our point of view, we are of course ready to serve," Corbyn said.

When asked about Brexit negotiations, set to start on June 19, Corbyn stressed they "will have to go ahead."

The latest results give May's Conservatives 315 seats, Labour 261, the Scottish Nationalist Party 35, the Liberal Democrats 12, and the Democratic Unionist Party (DUP), in Northern Ireland, 10, which — with only a few results remaining — means May has no chance of gaining an overall majority.

In order to gain a single point majority, parties need to gain 326 seats, which May has manifestly failed to do. Her only hope is to do a deal with the DUP in Northern Ireland, but that would still leave her with a very slim majority — and not guaranteed to hold it one every parliamentary vote, depending on the issue.