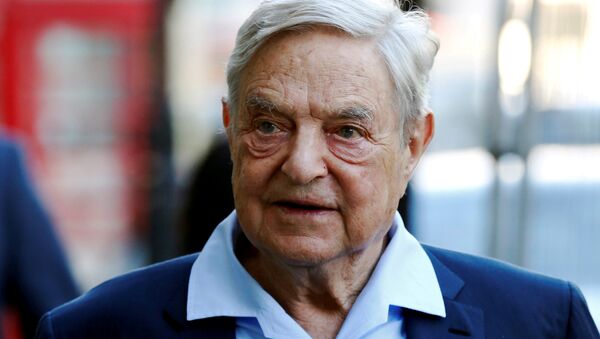 'Mafia Network': Why Hungary Becomes a Thorn in the Side of George Soros
The simmering economic crisis in the EU has brought to life numerous non-governmental organizations (NGOs) created by beneficiaries to receive indirect economic and political profits under the smokescreen of their "humanitarian activity."

Manipulations of Hungarian-born American magnate George Soros and his Open Society Foundations is a shining example of such activity, Italian political commentator Mario Sommossa noted in his interview with Sputnik.

"The most indicative case of combining altruistic humanitarian goals with 'down-to-earth' objectives is the work of the organization founded and sponsored by George Soros," Sommossa told Sputnik Italian.

"He became famous in September 1992, when he had played the main role in instigating the so-called 'Black Wednesday,' which prompted the Bank of England to devalue the pound. This operation brought Soros about a billion dollars in net earnings," the political commentator recalled.

This particular case was described by political pundit Anatoly Vasserman, who explained how Soros' trick worked.

Why Brussels Teamed Up With Soros to Bring Hungary to Its Knees
"It is worth remembering [Soros'] famous stock-market trick when he borrowed a huge sum of money (about one billion pounds) and sank the British pound. [The trick] was not based on the fact that at that time the British economy was unstable. It was, of course, unstable, but the reserves of Britain would be enough to cope with this trouble. However, Soros's speculative actions had affected the minds of big stock players. And all of them, seeing that a very large sum had been converted from British pounds to Deutsche marks, believed that the pound would not resist [the pressure]. As a result, they all rushed to convert their assets from pounds to other currencies," Vasserman wrote in his op-ed for RIA Novosti.

However, according to Sommossa, "Black Wednesday" isn't the only example of Soros' currency manipulations.

The Italian political commentator told Sputnik that after graduating from the London School of Economics and getting a job in Singer & Friedlander in 1954 Soros started with speculative activities with national currencies.

"In 1992, he forced Italy to withdraw from the European monetary system and secretly sell him a huge amount of lira, which turned out to be a loss of 48 billion dollars for Rome," Sommossa highlighted.

Leaked Memo: Is Soros Planning 'Series of Color Revolutions' in Southeast Asia?
"He continued to do the same trick, each time creating difficulties for a particular state and gaining significant personal benefits. Since then, many countries have accused him of similar speculations which were on the brink of becoming illegal or even beyond the law," the commentator noted.

Interestingly enough, in his October 2016 interview with Sputnik Malaysian geopolitical analyst and scholar Mathew Maavak pointed out that Soros could also have had a hand in the Asian financial crisis of 1997, which started in Thailand with the financial collapse of the Thai baht.

"In addition, Soros' Open Society Foundations is one of the main supporters of free drug sales in the world," the Italian commentator remarked.

Indeed, the Foundations' Global Drug Policy Program envisages the support to "national and regional entities in their aim to decriminalize possession of all drugs, and emphasize alternative approaches to regulated access to a variety of currently illicit drugs."

"In addition, [Soros] created his own non-governmental organizations that deal with the issues of migrants and human rights protection," the Italian commentator said, "It is also well known that politics also lies in the sphere of his interest: Soros has invested hundreds of millions of dollars in the election campaigns of American Democrats."

Fake Protests: Who is Really Behind Well-Orchestrated Anti-Trump Campaign
Sommossa noted that in the result of the hacker attack on Soros' Open Foundations many inconvenient truths regarding the fund found their way out. In particular, it turned out that Soros' numerous entities were involved in funding election campaigns and associations engaged in the protection of human rights in different countries.

"In many cases, the purpose of such financing was political destabilization in the countries where these organizations worked. In other cases the goal was to create specific economic and financial conditions which allow [Soros'] entities to benefit from them," the commentator said.

"To understand who George Soros is and what some of NGOs he has created are involved in, one can simply refer to his own words. In an interview with CNN… Soros de facto admitted that he could finance the 'Maidan revolution' to 'bring a US-friendly junta to power.' In the same interview, he admitted that he conducted similar operations in Georgia, Kyrgyzstan, Myanmar, and Iran," Sommossa emphasized.