What You Need to Know About Shanghai Cooperation Organization 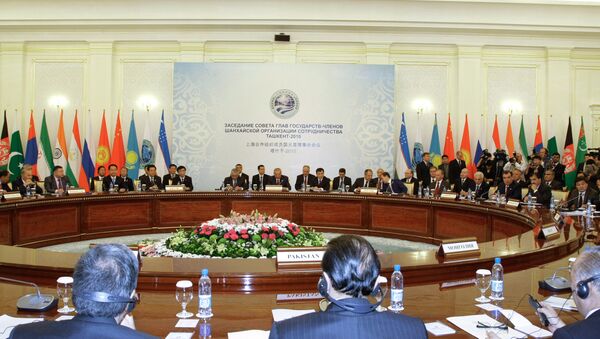 The summit of Shanghai Cooperation Organization (SCO) leaders kicks off in the Kazakh capital of Astana on Thursday.

The SCO was founded by the leaders of the six member states in Shanghai on June 15, 2001, but the history of organization dates back to 1996, when Russian, Chinese, Kazakh, Kyrgyz and Tajik leaders gathered in Shanghai and signed the Treaty on Deepening Military Trust in Border Regions. A year later, the same leaders in Moscow signed the Treaty on the Reduction of Military Forces in Border Regions, and these two documents facilitated cooperation between the countries.

In June 2002, SCO leaders signed the SCO Charter at a St. Petersburg summit in Russia, which came into force on September 19, 2003. The Charter was a fundamental statutory document determining the organization’s purposes and principles, as well as its structure and principal areas of activity.

The SCO’s main goals include strengthening mutual trust and good-neighbor relations among members, encouraging effective cooperation among members in the fields of politics, economy and trade, science, technology and culture, as well as in education, energy, transport, tourism and environmental protection, security and stability in the region, and the establishment of a fair, democratic and rational international political and economic understanding.

SCO activity acquired a broad economic dimension in September 2003, when members signed a 20-year Program of Multilateral Trade and Economic Cooperation. The program set a long-term goal of establishing a free trade zone within the SCO and a short-term goal of providing a favorable environment for trade and investment.

In 2006, the alliance announced its plans to combat international drug trafficking, seen as a financial pillar of the global terrorism. Effective joint counteraction against global threats became a key issue in the organization's agenda.

The Treaty on Long-Term Good-Neighborliness, Friendship and Cooperation, signed in August 2007 in Bishkek, Kyrgyzstan, became a firm step toward strengthening the association’s legal framework.

The organization committed itself to stabilizing Afghanistan which has been engulfed in a long-lasting military conflict.

The Council of Heads of State (CHS) is the SCO’s top decision-making body and meets once a year, making key decisions on matters of the organization’s activity.

In addition to CHS and CHG meetings, there is also a mechanism for arranging meetings on the parliamentary level, security council secretaries, ministers of foreign affairs, defense, emergency situations, economics, transportation, culture, education and healthcare, as well as meetings of heads of law enforcement agencies, chairmen of supreme and arbitration courts and prosecutors general.

The major economic bodies of the organization are the SCO Business Council, the SCO Interbank Consortium, and the Council of National Coordinators (CNC) in charge of management interaction within the SCO.

The only two permanent bodies of the organization are the Secretariat in Beijing, which is supervised by the secretary-general, and the Executive Committee of the Regional Anti-Terrorist Structure (RATS) in Tashkent, Uzbekistan.

SCO member states chair the organization through a rotating annual presidency, completing their term with a summit on the territory of a presiding state.

The secretary-general and the director of the Executive Committee are appointed by the CHS for three years. The SCO’s official and working languages are Russian and Chinese.

Foreign Military Presence Bars Afghanistan From Joining SCO
The two-day long summit of SCO leaders in Astana will start on Thursday. The agenda of the summit will include issues related to cooperation in fight against international terrorism, security and the situation in the Middle East and Afghanistan.

According to Russian Deputy Foreign Minister Igor Morgulov, the six leaders will release a special statement on cooperation in fighting against terrorism. They are also expected to sign the SCO convention on fighting extremism, which is expected make a significant contribution to the legal base of international cooperation in this area. A total of 11 documents are expected to be signed during the summit.

India and Pakistan’s accession to the SCO is expected to be the key event of the upcoming summit. At the 2016 summit held in Uzbekistan, the SCO leaders signed memorandums on the accession of these states to the organization.