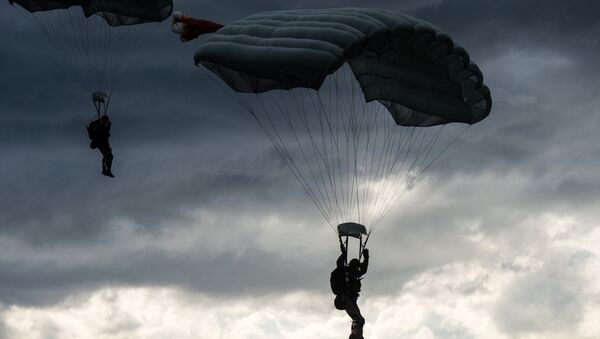 © Sputnik / Evgeny Biyatov
/
Go to the photo bank
Subscribe
Russian paratroopers have landed in the west of Belarus in the course of the Slavic Brotherhood-2017 drills.

Belarus Set to Host Slavic Brotherhood-2017 Joint Drills With Russia, Serbia
BREST REGION (Belarus) (Sputnik) — A Belarusian chopper dropped a dozen of Russian paratroopers near the border with Poland in an early Thursday exercise that was part of three-way anti-terror drills, a Russian military official said.

He said the landing took place in the Brest region from the height of almost 547 miles. Belarus has been hosting since this Tuesday a military exercise codenamed the Slavic Brotherhood-2017, which will see a thousand of Russian, Belarusian and Serbian paratroopers train together until June 14.

The first Slavic Brotherhood tactic drills took place in September 2015 at the Rayevsky range in Russia, followed by an exercise outside the Serbian capital of Belgrade in November 2016.