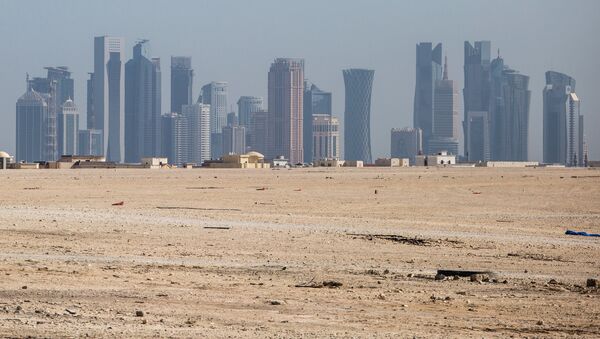 The overthrow of Qatar’s royal family and, possibly, even the elimination of Qatar's statehood through its annexation to Saudi Arabia could be the endgame for Saudi Arabia in the recent Arab states' diplomatic row with Qatar, experts told Sputnik.

MOSCOW (Sputnik) — Bahrain, Egypt, Saudi Arabia and the United Arab Emirates severed diplomatic ties and transport links with Qatar on Monday, accusing Doha of supporting terrorist organizations and destabilizing the situation in the Middle East. The authorities of eastern Libya, Yemen, as well as the Maldives, Mauritius and Mauritania later also announced the severance of relations, while Jordan said that it will lower the level of diplomatic contacts with Qatar.

"Even though the United States declared its neutrality, it is hard to believe that the developments of the recent days were not approved by Washington. I am not 100 percent sure what the main goal is. However, I think that it may be aimed, at a minimum, at changing Qatar's policy or overthrowing the royal family. As an extreme option, it could be aimed at the elimination of Qatar as an independent state and its annexation to Saudi Arabia," Yakov Kedmi, a retired high-ranking Israeli intelligence official, said.

Saudi Arabia and its allies set out several conditions for Qatar to normalize the bilateral relations amid the diplomatic rift and gave Doha 24 hours for the implementation of the conditions.

Why Saudi Arabia 'Punishes' Qatar and How Doha Could Respond
The conditions reportedly included the expulsion of all members of the Muslim Brotherhood terrorist group (outlawed in Russia) and the Palestinian Hamas movement from the country, freezing of their bank accounts and the suspension of any relations with these groups. An immediate break of diplomatic ties with Iran was also one of the conditions laid down by Riyadh.

The Qatari Foreign Ministry rejected accusations of Doha's interference in other countries' domestic affairs and expressed regret over the decision of the Gulf States to cut off diplomatic ties.

According to Thomas Lippman, a scholar from the Middle East Institute, Qatar’s ongoing diplomatic dispute with neighboring Gulf countries is more of the same Gulf politics reminiscent of the 2014 incident when Saudi Arabia, Bahrain and the United Arab Emirates also demanded from Qatar to cut its relations with Iran and the Muslim Brotherhood.

Lippman believes that this crisis has been triggered first and foremost by the growing ties between Qatar and Iran.

"The issues here are mostly GCC [Gulf Cooperation Council] politics and relations with Iran. Nobody believed the Qataris when they said those comments from the emir about Iran and Saudi Arabia were posted by hackers, rather than genuine sentiments," he stated.

Qatari Soldiers Involved in Arab Coalition's Yemen Operation Return Home
The diplomatic row came in the wake of the Qatar News Agency posting a speech attributed to Qatar’s Emir Sheikh Tamim bin Hamad Al Thani, in which he supported building relations with Iran. The Qatari Foreign Ministry said that the agency's site was hacked and the speech was published by hackers that had nothing to do with the Qatari leader.

Yakov Kedmi expects more pressure on Qatar in the next few days, which may lead to a complete economic blockade.

The row looks like a well-planned operation designed to end Qatar's independent foreign policy, maintained by Doha for decades with the support of the United States, after US President Donald Trump chose to support Saudi Arabia instead, according to Kedmi.

"Under President Clinton, Bush and Obama, Qatar received a broad political support and was one of the main allies of the Americans in the region. Qatar is the largest investor into the US economy and in the political infrastructure of the United States and its politicians. When Trump recently has visited the Middle East and met with the Arab leaders, he demanded from the Arab states to end their support of all terrorist organizations including IS, Al-Qaeda and Hamas. These talks served as a basis for this diplomatic rift," he explained.

Leaked e-mails of ex-Secretary of State Hillary Clinton, published by WikiLeaks, suggested US authorities were aware of the support granted by Qatar and Saudi Arabia to terrorists operating in the Middle East.

Qatari FM to Arrive in Moscow, Meet With Lavrov Amid Tensions With Arab States
At the same time, Qatar continues to host the Al Udeid Air Base, the largest in the Middle East, which is home to 10,000 US servicemen and serves as a major communications and operational center for Washington in the region.

According to the expert, the Muslim Brotherhood group may be at the heart of the ongoing crisis. Saudi Arabia, Egypt and their allies want like to take advantage of the change of US priorities and eliminate the Muslim Brotherhood, supported by Qatar and the United States in the past, as a force in the Arab and Muslim world.

For a long time, the Muslim Brotherhood has influenced the ideologies in the Middle Eastern countries. Many states, including Egypt and Saudi Arabia, banned the movement.

By supporting the Muslim Brotherhood across the Arab world, Doha was trying to gain political weight in the region as opposed to Saudi Arabia to guaranty its security, Kedmi pointed out.

"Gas-rich but small Qatar was trying to find external sources of security and support in the region and worldwide fearing the constant threat posed by Saudi Arabia. With the help of Qatar and the money of Qatar Al Jazeera Satellite Channel became the voice of the Muslim Brotherhood. This policy led to the eruption of protests in the Muslim countries known as the Arab Spring in Tunisia and Egypt and became one of the causes of the war in Syria," the expert said.

Qatar has long had strained ties with its neighbors, but the move by Riyadh and allies caught the international community off guard.

Foreign powers made urgent calls for talks to end the crisis.

The German Foreign Ministry expressed its concern about the speed with which the diplomatic conflict between Qatar and its Arab neighbor states is developing, and the consequences this "dramatic escalation" could bring for the Persian Gulf, while Russian Foreign Minister Sergey Lavrov outlined the importance of settling differences through dialogue.