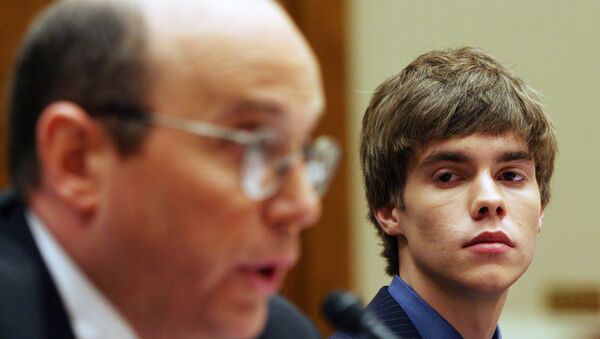 It all started on Tuesday night, when the Vanity Fair and Newsweek contributor was negatively name-dropped by his nemesis, Fox News host Tucker Carlson. On Wednesday, Eichenwald replied with a series of negative tweets: "Apparently, @TuckerCarlson brought me up on his show last night. I wouldnt know. Like most ppl now, I dont watch it."

Eichenwald then posted a flyer that he claimed to have been mailed, featuring a Jewish caricature laughing sinisterly as the world literally burns, with the caption "DANGER: EVIL JEWS IN CHARGE".

And @TuckerCarlson —since being on ur show, I get things like this a lot, most always from ppl mentioning u. Ur the Julius Streicher of Fox. pic.twitter.com/iYiFWd7uh2

"Since being on your show," he tweeted to Carlson, "I get things like this a lot, most always from ppl mentioning u. Ur the Julius Streicher of Fox." (Streicher was the publisher of the vehemently anti-semitic newspaper Der Sturmer, which was popular in Nazi Germany. At the postwar Nuremberg trials, Streicher was convicted of being an accessory to the mass extermination of Jews during the Holocaust and was sentenced to death.)

Yah, crappy photoshop Max. Unfortunately, no, this is what I got today. pic.twitter.com/jmi1U4wLUd

People began to mock what was quickly dubbed "hentaigate," kink-shaming poor Mr. Eichenwald for his enjoyment of anime girls getting railed. Perhaps the story would have petered out after that… until Eichenwald made the questionable decision to publicly defend himself.

…some to show her it was real. But I couldn't find any — & ended up w/ this. My family reads my twitter feed, so they know this is true.

It isn't Sputnik's policy to kink-shame, but some have argued that Eichenwald brings it upon himself.  He frequently tells people who argue with him on Twitter to go "watch their cartoons." This was apparently an accusation of immaturity, but recent events have reframed it.

.@seanmac65 @CarriWeatherwax @LisaKBromley Mm-hmm. Now go take your meds, watch your cartoons, and then have a nap. Adults are talking.

​This isn't the first time Eichenwald and pornography have meshed poorly. In 2005, he published an article in the New York Times about a child pornography ring he claimed to have accidentally discovered on a Google search. (Sound familiar?) Instead of alerting the police, Eichenwald contacted the website and offered them thousands of dollars to allegedly better expose the ring.

This was a major breach of journalistic etiquette, not to mention that he literally funded child pornography. When pressed, Eichenwald admitted that he had made a mistake, but claimed to have forgotten that he even made the payments due to memory loss brought on by his epilepsy.

At least this time, all he did was make a fool of himself in public, rather than outright disgracing the profession.