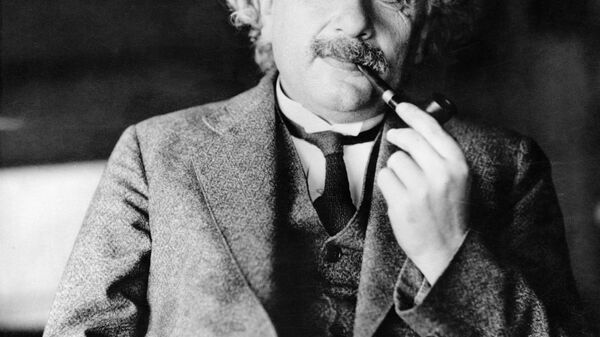 © AP Photo / File
Subscribe
In 1936, Albert Einstein predicted the weight of stars could be measured via bending distant starlight by its own gravity. However, as stars are so far apart, the esteemed physicist never thought the phenomenon could be observed. Now, thanks to the Hubble Space Telescope, Space Telescope Science Institute researchers have done the impossible.

Einstein predicted whenever light from a distant star passes by a closer object, gravity acts as an effective magnifying lens, brightening and bending the distant light. The same phenomenon has been observed via black holes, in a technique known as gravitational lensing. When the magnifier is a smaller galactic entity such as a star, this is known as gravitational microlensing.

For the first time, Hubble has measured the mass of a white dwarf using microlensing! Einstein would be proud.
READ: https://t.co/XytPsA5P5e pic.twitter.com/ZNKbdLLv6d

​In 1919, measurements of light curving around a total eclipse of the Sun gave mankind proof of Einstein's general theory of relativity. While the concept was originally minted in 1905, it took until then — and the advent of a solar eclipse — to verify it. Einstein predicted the mass of the Sun should distort space enough to bend the light arriving from distant stars — and he was correct.

​In essence, when a star in the foreground passes exactly between Earth and a background star, gravitational microlensing results in a perfectly circular ring of light. This effect has been dubbed an "Einstein Ring."

​Eintstein Rings have been observed before using the Sun, but never another star. In the study, two objects were slightly out of alignment, and an asymmetrical version of an Einstein Ring formed. The closest star in the system was white dwarf Stein 2051 B, 18 light-years away.

The Institute team managed to determine the mass of a white dwarf using Einstein's theoretical method, measuring shifts in the apparent position of a distant star as its light was deflected around Stein 2051 B on eight occasions between October 2013 and October 2015.

​They determined Stein 2051 B — the sixth-closest white dwarf star to the Sun, a comparatively trifling 18 light years away — has a mass that about two-thirds of the Sun's. The white dwarf was chosen from a shortlist of 5,000 potential stars. The future flight paths of these stars were projected forward in time, and the team compared those to a list of stars distant and stable enough to act as guide stars for telescopes and spacecraft.

While ground-based telescopes simply lacked the requisite sight power to track the background star effectively, the Hubble Space Telescope was a perfect match for the challenge. The images produced by the telescope were not requisite for validating Einstein's theory, given both the Earth and the stars in between are constantly on the move, even if almost imperceptibly. To solve the issue, the team used a set of 26 stars in each image to create a single, undistorted reference frame before correcting every image accordingly.

The ring and its brightening were too small to be measured, but its asymmetry caused the distant star to appear off-center from its true position — this too is part of Einstein's prediction — "astrometric lensing" — and the team is the world's very first to observe it in a star other than the Sun.

​This is significant, as it provides yet another way to prove Einstein's theory of general relativity is correct. It also solves the enduring mystery of the mass and composition of Stein 2051 B, which has existed for nearly a century.

It furthermore confirms astrophysicist Subrahmanyan Chandrasekhar's 1930 Nobel Prize-winning theory about the relationship between the mass and radius of white dwarf stars.

Additionally, the research also gives researchers another way of measuring the mass of stars. The apparent deflection of the background star's position is directly related to the mass and gravity of the white dwarf — this can now be used as part of huge new surveys to uncover other chance alignments.

Einstein would surely be proud at the breakthrough — both that another of his key predictions has passed a rigorous test, and at the efforts of the determined researchers.

000000
Popular comments
ah, something else to be added to the various star atlases perhaps? :)
michael
9 June 2017, 05:02 GMT1
000000
michael, people do not fully seem to understand where Einstein came from. His father's power plant construction business electrified Switzerland and northern Italy. His dad's company did the entire newbuild from the ground up, literally winding the generators and electric motor coils by hand as well as braiding the transmission wires from the raw metal wire, cloth and varnish. In order to do this one needed a comprehensive knowledge of magnetism in practical depth. Many of the effects of which Einstein wrote relate directly back to his upbringing and to listening to his father, who had dreams of passing on the company to his son (Einstein did not want the business, it was too much like work when he could chase beautiful women in Daddy's Bugatti whilst wearing artists' finery: a long draped cloak and a slouch hat) and play at being an intellectual. The math came to him on a second-nature basis from doing calc's for his father's business. He also did a mental thing which was unthinkable in that day and age except amongst power plant builders: evaluating the interplay of fluid dynamics of the type associated with hydroelectric power generation as it affected the electrical and magnetic equipment his father built. His father's company, BTW, survives his son the physicist. It is called the Prysmian Corporation at www.prysmian.com