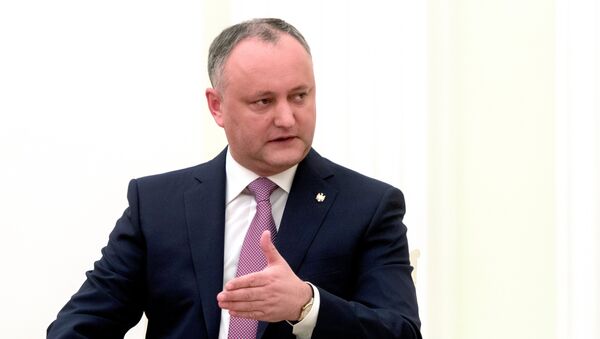 © Sputnik / Sergey Guneev
/
Go to the mediabank
Subscribe
International
India
Africa
Moldova will be granted observer status in the Russia-led Eurasian Economic Union (EAEU) during the meeting of the EAEU members states' heads in October, Moldovan President Igor Dodon said in the light of the first meeting of the joint working group on interaction between Moldova and the Eurasian Economic Commission with (EEC).

"I am sure that during the meeting of the EAEU member states’ leaders in [the Russian city of] Sochi in October, Moldova will get the observer status in the organization," Dodon posted on his Facebook account.

In addition, the Moldovan president confidently stated that the working group’s meeting would benefit Moldovan economy and business.

"The main goal of the [group’s] work is to start introduction of the cooperation memorandum between the EEC and Moldova, signed on April 3," Dodon stressed.

The decision to sign the memorandum came after Dodon expressed interest in Moldova participating in the EAEU as an observer during his talks with Russian President Vladimir Putin in mid-January. On April 14, Kyrgyz President Almazbek Atambayev said the EAEU Supreme Economic Council had approved the decision to grant Moldova an observer status.

The Eurasian Economic Union is aimed at developing intraregional economic ties and establishing the free flow of goods among its members: Russia, Kyrgyzstan, Kazakhstan, Belarus and Armenia.