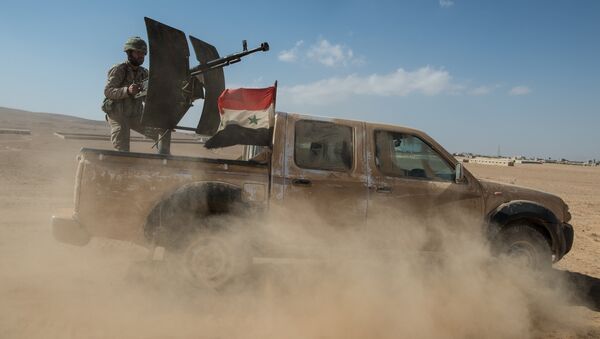 The US-led coalition said in a statement after bombing pro-Syrian government forces for the third time near al-Tanf that it doesn't aim to fight against the Syrian army or Russia.

The #Coalition does not seek to fight Syrian regime or pro-regime forces. However, we remain ready to defend ourselves against any threat," the coalition said on Twitter.

The #Coalition does not seek to fight Syrian regime or pro-regime forces. However, we remain ready to defend ourselves against any threat.

The coalition's spokesman added that the Syrian opposition supported by the US would stay near al-Tanf until Daesh terrorist group is defeated.

The statement comes following the US-led coalition's strikes on pro-Damascus forces near al-Tanf in the area of a deconfliction zone following an alleged attack by a combat drone resulting in no coalition forces' casualties. The coalition targeted the drone and trucks with weapons.

On May 18, the US-led coalition struck pro-Assad fighters near the town of al-Tanf in the area of an established deconfliction zone with Russia. The coalition strikes occurred near al-Tanf, where US' and British special operations forces have been training Syrian rebel fighters near the border with Iraq and Jordan. Russia slammed the move as a violation of international law.

Coalition Reinforces Positions Near Syrian al-Tanf After Attacking Syrian Army
On June 6, the Pentagon announced the coalition conducted a new strike on pro-Syrian government forces as they entered the de-confliction zone with Russia and posed threat to its personnel. The force comprised of a tank, artillery, anti-aircraft weapons, armed technical vehicles and more than 60 soldiers. A Syrian source told Sputnik on Tuesday that at least two Syrian servicemen were killed and more than 15 injured as a result of the coalition attack.