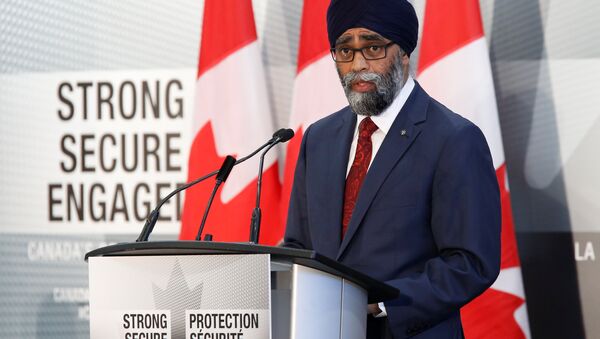 © REUTERS / Chris Wattie
Subscribe
Canada has laid out plans to boost military spending by a mammoth 73 percent over 20 years, with an expected leap from US$14 billion in 2017 to $24.2 billion by 2027, in order to ensure the country is "strong at home, secure in North America and engaged in the world." Major question marks hover over the proposals.

Outlining the strategy, Defense Minister Harjit Sajjan said if Canada was serious about its role in the world, it must be serious about funding its military. The increases would drag the country's defense budget from around one percent of GDP in 2017 to 1.4 percent by 2024-25, nearer the two percent target set for NATO members US President Donald Trump is pushing hard for bloc constituents to reach.

Through our new Defence Policy, we will do more for our people in uniform, and their families. #CanadaDefence pic.twitter.com/Kxpsj3FM4W

​It is believed in the short-term the plans will see 15 warships and 88 fighter jets purchased, and 5,000 fresh troops recruited. An open tender will be offered for the jets, which replace Canada's existing 77-strong fleet of CF-18 planes.

​In 2016, Ottawa was on the verge of purchasing 18 Boeing Super Hornets but in May suggested the plans would be scrapped unless a US investigation into Canadian planemaker Bombardier was dropped. The investigation is assessing claims Bombardier receives subsidies from the Canadian government allowing it to sell CSeries passenger planes below market prices.

The brave men & women in uniform are at the heart of the @CanadianForces. That’s why we’re investing in them.

​US Defense Secretary Jim Mattis welcomed the plans, saying he was "heartened" by the policy.

"This demonstrates Canadian resolve to build additional military capacity and a more capable fighting force. In light of today's security challenges around the world, it's critical for Canada's moral voice to be supported by the hard power of a strong military," Mattis said.

We will grow the size of the @CanadianForces by 3500 Regular Force and 1500 Reserve Force members. #CanadaDefence pic.twitter.com/zuNITYDy8a

The announcement follows a speech to parliament by Foreign Minister Chrystia Freeland June 6, in which she said international relationships that had seemed "immutable for 70 years" were now being called into question.

"The fact our friend and ally has come to question the very worth of its mantle of global leadership, puts into sharper focus the need for the rest of us to set our own clear and sovereign course. For Canada that course must be the renewal, indeed the strengthening, of the postwar multilateral order. NATO and Article Five are at the heart of Canada's national security policy. We will make the necessary investments in our military, to not only redress years of neglect and underfunding, but also to place the Canadian Armed Forces on a new footing-with the equipment, training, resources and consistent, predictable financing they need to do their difficult, dangerous and important work," she said.

Our plan is fully-costed, fully-funded, and is a sign of our commitment to our women and men in uniform and their families. #CanadaDefence pic.twitter.com/BAE7J1a3ot

Such lofty aspirations beg numerous questions. For one, due to the failure of most NATO member states to reach the two percent target, Canada is already the sixth-highest spender in the bloc, and 16th in the world. The country has consistently been a frequent contributor to overseas coalitions, supporting the UK and US in various large-scale engagements the world over. Evidently, despite the "years of neglect" the country's military has endured, it is already a well-funded fighting force.

​Some analysts are deeply concerned about the vast planned hikes being undertaken in response to pressure from the US defense establishment. Peggy Mason, Canada's former Ambassador for disarmament and President of the Rideau Institute in Ottawa, said the proposed increases were an "enormous sum," and many Canadians believed the money would be better spent on" various social, environmental, peacebuilding, and humanitarian programs."

"This is a total capitulation to the bullying of President Donald Trump. The Liberals did not campaign on and have no mandate for these increases and there's been no change in security to justify such astronomical increases. The only thing that's changed is Donald Trump has been elected," she added.

000000
Popular comments
haha the puppets are being squeezed out !!!