At the Crossroads: Arab States' Row With Qatar Aimed to Distance it From Iran 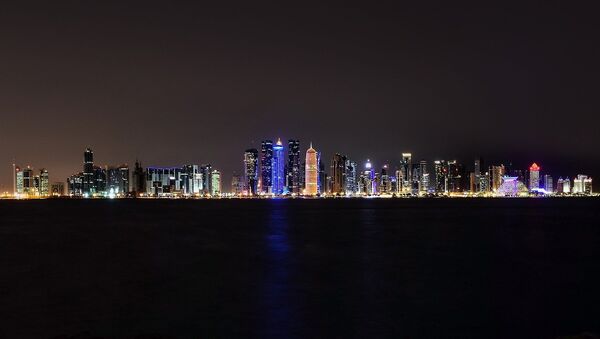 CC0 / Pixabay /
Subscribe
On Monday, Saudi Arabia, Bahrain, Egypt and the United Arab Emirates cut diplomatic ties with Qatar, having accused it of supporting terror and destabilizing the Middle East.

Diplomatic Rift With Qatar Plays Into Terrorists' Hands - Moscow
Yemen, the Maldives, Mauritius, Mauritania, the Comoros and the government of the eastern part of Libya said they would follow suit. Jordan and Djibouti declared they have downgraded diplomatic relations with Doha, while Senegal recalled its ambassador.

Sputnik Mundo spoke with political analysts Paulo Botta and Federico Gaon about the rising tensions in the Middle East.

An expert on security in the Middle East, Paulo Botta, believes that there are no countries in the region that will willingly be “dragged into a very dangerous” foreign policy.

However, “Saudi Arabia interpreted the clear support of the United States as a carte blanche for pressure on other countries. Qatar in turn established its restrictions. Behind this move lies the intra-Arab quarrel over hydrocarbon resources. Qatar is the second country in the world with the most gas reserves after Russia,” Botta said.

Analysts named rapprochement with Iran and the search for their own foreign policy line as the main causes of the recent Qatari crisis.

This row primarily broke out two weeks after the visit of US President Donald Trump to Saudi Arabia, where he accused Iran of aiding and supporting terrorism and destabilizing the region.

Federico Gaon, also specializing in Middle Eastern issues, said that such aggression had never taken such a scale before.

“Economic sanctions against Qatar will have serious consequences. 90 percent of the products are imported from Saudi Arabia via land routes,” Gaon said.

Why Saudi Arabia 'Punishes' Qatar and How Doha Could Respond
The reason for this rigidity, according to the analyst, lies in the intention “to make the small kingdom change its foreign policy, move away from Iran and cease supporting the Muslim Brotherhood,” Gaon said.

The analyst feels that such a measure against Qatar is associated with the “performances of Donald Trump during his visit to the country.”

“It is no coincidence that Sunni states are settling their scores with Qatar,” the analyst added.

On June 6, Donald Trump wrote the following on his Twitter page:

“During my recent trip to the Middle East I stated that there can no longer be funding of Radical Ideology. Leaders pointed to Qatar – look!”

​Later on, Trump mentioned how good the trip to Saudi Arabia had been, hoping it would lead to a process that would put an end to terrorism.

Botta in his comment to Sputnik also pointed to another fact that should be taken into consideration: the timing.

"Over the past 25 years we have become accustomed to the fact that the United States was the only “external” power in the Middle East, but today Russia also needs to be taken into account. This is reflected in its role in Syria, its involvement in Yemen, Libya and cooperation with Egypt and Iran,” Botta said.

According to the analyst, “the Saudis are promoting a policy that in reality does not exist anymore.”

Meanwhile, Goan noted that Qatar is at a crossroad because it is impossible to be on the side of the Iranians, the Muslim Brotherhood and the conservative authorities of Egypt and Saudi Arabia all at the same time.

“The current situation is the way in which the countries of the region are showing that the time is up,” Goan concluded.

000000
Popular comments
Russia should MOVE and sell all needs to QATAR. I would. U.S became a SOLE POWER thanks to , The INFAMOUS, GORBACHEV!!! Of course YELTSIN the TRAITOR , was just a west TOOL. E.U used him, to gift away RUSSIAN LANDS. Today their is a struggle for POWER. Russia is becoming a COWARD POWER. Run by FOOLISH politicians. And THIS is how it is seen by others. Why? Politicians are in SHORT PANTS all over. A SHAME. How you allow an illegal coalition to attack Syria? How you run deals with Pentagon, and they use the deals to capitulate and take over the situation? Right now U.S and coalition are acting ;like an ABSOLUTE POWER, with ALL powers at hand. U.N does what is told. Geneva too. Russia is a coward hiding behind some FALSE PARTNERSHIP invented in MOSCOW. I mean it just makes NO SENSE. Oh we spoke at U.N... Really? AND? Palestine been talking there and at Washington for decades. Israel stopped? When? IF Russia wants to REALLY be considered, it MUST end all attacks on Syrian forces. Patrol and let the military do it's job. I guarantee, you let Rus military DO what it does, and the COALITION, will RUN to Washington as what they are. COWARDS. This is why, Washington, NATO, is probing the Black Sea etc. Because they figuring the politicians will get involved and they will get all they want. As ever before. Give it one try. Tell the Rus military, try to protect the Syrian allies. SEE how FAST it ends, IF U.S BARKS, Oh you better don't point weapons at our planes. Tell them, .. You know what to do. Stop the illegal invasion of Syria and sponsoring terror with U.K, E.U NATO.. Because is ALL about blaming someone else.
cast235
8 June 2017, 21:50 GMT
000000
Newsfeed
0
New firstOld first
loader
LIVE
Заголовок открываемого материала
Access to the chat has been blocked for violating the rules . You will be able to participate again through:∞. If you do not agree with the blocking, please use the feedback form
The discussion is closed. You can participate in the discussion within 24 hours after the publication of the article.
To participate in the discussion
log in or register
loader
Chats
Заголовок открываемого материала
Worldwide
InternationalEnglishEnglishMundoEspañolSpanish
Europe
DeutschlandDeutschGermanFranceFrançaisFrenchΕλλάδαΕλληνικάGreekItaliaItalianoItalianČeská republikaČeštinaCzechPolskaPolskiPolishСрбиjаСрпскиSerbianLatvijaLatviešuLatvianLietuvaLietuviųLithuanianMoldovaMoldoveneascăMoldavianБеларусьБеларускiBelarusian
Transcaucasia
ԱրմենիաՀայերենArmenianАҧсныАҧсышәалаAbkhazХуссар ИрыстонИронауОssetianსაქართველოქართულიGeorgianAzərbaycanАzərbaycancaAzerbaijani
Middle East
Sputnik عربيArabicArabicTürkiyeTürkçeTurkishSputnik ایرانPersianPersianSputnik افغانستانDariDari
Central Asia
ҚазақстанҚазақ тіліKazakhКыргызстанКыргызчаKyrgyzOʻzbekistonЎзбекчаUzbekТоҷикистонТоҷикӣTajik
East & Southeast Asia
Việt NamTiếng ViệtVietnamese日本日本語Japanese中国中文Chinese
South America
BrasilPortuguêsPortuguese
NewsfeedBreaking
19:00 GMTGerman Court Rules Kohl's Widow Cannot Inherit $1Mln Compensation From Journalist
18:59 GMTShanghai Data Exchange: How China is Set to Outpace US in Data Trade & Technological Competition
18:57 GMTEx-US Capitol Police Officer Appears in Court for January 6 Related Charges - Reports
18:54 GMTFrance to Propose EU-UK Pact on Illegal Migration
18:50 GMTBeijing Has No Plans to Invite to Olympics US Politicians Calling for Boycott, Report Says
18:35 GMTMI5 v MI6: Tug-of-War Over a Triple Defector
18:30 GMTOutrage in Italy After Female Correspondent Sexually Harassed During Live Broadcast
18:26 GMTFrom Geek Fashion Model to Big-Tech Gandalf — Jack Dorsey's Rise and Fall
18:13 GMTWho is Parag Agrawal, New Twitter CEO?
18:08 GMTFrench Prosecution Demands Imprisonment, Fine, Political Ban of Former PM Fillon - Reports
18:04 GMTBiden Ready to Release More Oil From Strategic Reserve to Keep Prices Down- Energy Adviser
17:47 GMT'Plausible Deniability': Joe Biden Was Aware of Hunter's Chinese Deals, But Knew No Details – Report
17:03 GMTPresident Joe Biden Delivers Update on US Response to Omicron Coronavirus Variant
17:02 GMTTwitter CTO Parag Agrawal to Replace Jack Dorsey as CEO
16:49 GMTGerman Inflation Rate Soars to 29-Year High of 5.2% – Statistics
15:44 GMTNew Omicron COVID Variant May Cause Stagflation, Economist Warns
15:37 GMTSwedish Parliament Votes Andersson for Prime Minister Again After Surprise Resignation
15:35 GMTRihanna Stuns Netizens With Her Company’s Pyjamas With 'Derriere Cleavage'
15:23 GMT12 Indian Politicians Suspended From Parliamentary Session, Opposition Brands Move 'Undemocratic'
15:22 GMT'Trying to Keep Fart in Your Pants': Piers Corbyn's Anti-Mask Video Baffles Netizens